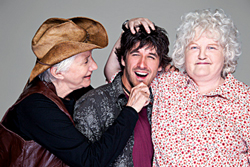 HARTFORD, Conn. — A vivid rainbow of genres, topics, voices and viewpoints will be shared in the 25th season of the Connecticut Gay & Lesbian Film Festival, taking place June 1-9 during LGBT Pride Month. Cinestudio at Trinity College is the site for this milestone season, except for dual closing night screenings at the Connecticut Science Center and Wadsworth Atheneum Museum of Art.

“The selection committee is pleased by the variety and number of high-quality feature films to be presented,” says Shane Engstrom, Director of Out Film CT, the not-for-profit producer of the Connecticut Gay & Lesbian Film Festival. “While the films are selected for their interest to the LGBT community, they depict a vast array of human experience and concerns that are universal to all audiences.

“These films are celebrations and affirmations of artistry, self-discovery and individuality, commonality and community. They offer opportunities learn about and question history and contemporary social issues. Most of all, the Festival is an entertaining forum that provides interaction with filmmakers and actors. Stay tuned, for early in May we’ll announce very special appearances,” Engstrom concluded.

The Connecticut Gay & Lesbian Film Festival is the longest-running cinema festival in the state. It has helped Hartford to become a regional movie-lover’s destination while it has galvanized and knit together the LGBT community since 1988.

Unlike many festivals organized by hired curators, this event is programmed by a group of 15 or so devoted volunteers, who have spent over 150 hours viewing 200 short and feature-length submissions since August 2011 until early April of this year.

Film screenings are at Cinestudio on the campus of Trinity College, 300 Summit Street, Hartford, with the exception of closing night. Movies are shown at 7:30 p.m. every evening during the festival, with additional matinee screenings slated for Saturdays and Sundays at 3:00 p.m.

Tickets to each of the opening and closing gala screenings are $18, $15 for students and seniors. Single tickets for other films are $10, $7 for students and seniors. Three-show passes (excluding opening and closing nights) are $24. Admission to the entire Festival is $75. Single tickets and festival passes are available online at www.OutFilmCT.org and may be purchased at the door. For more information, visit www.OutFilmCT.org.