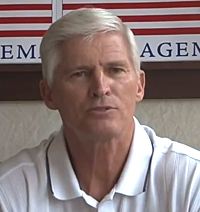 Facebook’s ever-changing privacy settings can be confusing, but you might want to click the “Only Me” setting if you’re about to post something completely bat-shit crazy on your wall and are a figure of any public significance.

Or, if you’re Republican National Committeeman Dave Agema, you can post a foaming-at-the-mouth anti-gay screed for lots of people to see, complain that criticism you’ve received as a result is unfair, and then reaffirm that you actually believe the crazy shit you posted.

Agema used to be a state representative in Michigan. He was insanely anti-gay then, which is clearly a dream he’s still pursuing.

And so it was that Agema found himself posting an article titled “Everyone Should Know These Statistics on Homosexuals” by Frank Joseph, M.D., who may or may not be a real person. Regardless, whoever did write this had quite the imagination.

But wait, you say, the article has footnotes! It must all be true! Except the most recent source Joseph uses is from 1994, and the majority are from the late 70s and early 80s. For example, Joseph’s claim that “78 percent of homosexuals are affected by STDs” cites a source from 1982. Someone with even the most basic research skills would look at that number and say, “Huh. 78 percent sounds pretty high and 1982 was a long time ago. I’d better see if any more current information exists to back up such a wild claim before I post it to Facebook and defend it as gospel.” But not Agema.

“The suicide rates and the murder rates, the diseases and the fact that they die younger and so fourth, it’s all in there,” Agema told WWMT-TV. “I not only believe it but it’s substantiated by several different articles and studies. That’s just a fact.”

And that, ladies and gentlemen, is how “facts” are made: anything that is included in “several different articles and studies” must be true, especially if someone with an M.D. after his name has posted it to the Interwebz, The Official Home of The Truth.

Republicans and Democrats alike have been calling for Agema to resign for posting such dumbf&$#ery to Facebook, but Agema has no intentions to do so and furthermore thinks this is all much ado about nothing.

“They quoted as what somebody else said and attributed it to me; I didn’t say that,” Agema said. In other words, “Just because I posted it to Facebook doesn’t mean I should be held in any way accountable for its message.”

“So, do I agree with everything that that guy said and the way he said it in the article, no. But he gives a lot of statistics on the results of the health and mental and physical health of the lifestyle and what it causes.”

Yes, yes he does. Lots of “statistics” specifically conjured to appeal to people who already believe terrible things about gays and lesbians. Thinking people are not the target audience here.

Which is why I think posting this was actually a cry for help. Coming out as stupid can be very difficult, but the kind of ignorance Agema embraces is most certainly a lifestyle choice.