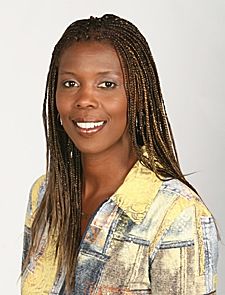 Star Parker, founder of the Center for Urban Renewal and Education, railed against homosexuality in addition to blaming the government for making black people poor
Photo: Urban CURE

Star Parker, founder of the Center for Urban Renewal and Education, railed against homosexuality in addition to blaming the government for making black people poor
Photo: Urban CURE

The Values Voter Summit that took place Oct. 11-13 was an all-you-can-derp buffet of right-wing lunacy. Needless to say, many VVS speakers chose “the homosexual menace” as one of the focal points of their mouth breathing.

One such speaker was Star Parker, founder of the Center for Urban Renewal and Education, who railed against homosexuality in addition to blaming the government for making black people poor. I do believe she used the term “slaves” in relation to government “dependency.” You see, Parker is black and she was on welfare for seven years at some point and then she went to college and now welfare is evil and no one should have it. The end.

There were many things about her speech that belied a connection with reality, beginning before she even opened her mouth. She walked to the podium to “What Doesn’t Kill You (Stronger)” by Kelly Clarkson. Which made me wonder if speakers were allowed to choose their own intro music and if Parks thought that Clarkson was singing about breaking free from government shackles. Then again, Clarkson did once Tweet her love for Ron Paul, so who knows? [pullquote]You see, Parker is black and she was on welfare for seven years at some point and then she went to college and now welfare is evil and no one should have it. The end.[/pullquote]

Parker spent most of her speech calling progressives liars.

“[Progressives] say that if you Christians would just get with the program. Rap a little, smoke a little pot, take off your clothes in front of total strangers a little, give up your guns, give up your God and your disapproval of gays and of course if you would just put some really liberal Republican candidates up for statewide and national seats then maybe, just maybe the national comedians will stop mocking you and the national news will just ignore you instead of try to destroy you,” she says. “Oh the lies of the left.”

First of all, ha ha ha ha. Second of all, ha. Sorry, I can’t stop picturing some faceless “progressive” urging good conservatives to “smoke a little pot” and get nekkid. And then, of course, he’d goad them into using food stamps at 7-11 for some Doritos and ice cream.

“[Progressives] declared a war on marriage which weakened women and opened a door to this new culture of meaninglessness,” Parker says. “Homosexuality is now dividing us and bringing hostility into the public square.”

Yeah! This African-American woman is right. I simply cannot think of anything that has come before this whole homosexuality business that has divided Americans. If only I could think of something or maybe even two things in our nation’s history while this person with dark skin and a vagina is speaking. Hmm… Nope. I’ve got nothing. Parker is right. Everybody was nice and equal and un-hostile before these gays started causing trouble.

Parker continues, “All sexual behavior’s adult behavior in my opinion, so keep it private!” This gets whoops and cheers from the audience. Because if only gays would stop being so public about their gayness then nice conservative folks could just keep oppressing them without so much meddlesome opposition.

Then, after complaining about how government dependency has ruined black people, Parker goes in for the kill: “It is nowhere in our nation’s Declaration of Independence or Constitution that a politician has a right to force free people to pay for the lifestyles and indulgences of other free people. Not their housing, not their healthcare, not their food, not their childcare, not their retirement, not their habits, and certainly not their sex life.”

And the predominantly white crowd goes insane. Finally, a black person saying what they’ve felt all along about black people (with a jab at homos thrown in for good measure) and it feels great. Free at last, free at last, thank God almighty the white conservatives at the Value Voters Summit are free, at last from having to pretend they give a shit.