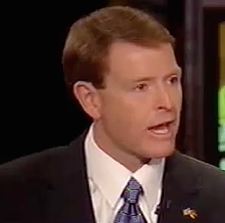 Tony Perkins quotes the Bible, Jesus and guns, as well as blames the Boston bombings on anything related to sex and families.

Tony Perkins quotes the Bible, Jesus and guns, as well as blames the Boston bombings on anything related to sex and families. Photo: YouTube Archives

By :D’Anne Witkowski*/Special to TRT–

The only thing that can stop a bad guy with a gun is a good guy who is not having gay sex.

At least this seems to be the line of reasoning the Family Research Council’s Tony Perkins is using to both cheer the failure of gun control legislation in the United States Senate, and to blame the Boston Marathon bombing on anything related to sex and family that Perkins does not personally approve of.

“If Congress wants to stop these tragedies, then it has to address the government’s own hostility to the institution of the family and organizations that can address the real problem: the human heart,” Perkins writes.

Got that? The real problem is “the human heart.” Perkins’ problem, specifically, is that he does not have one.

Perkins continues, “As I’ve said before, America doesn’t need gun control, it needs self-control. And a Congress that actively discourages it – through abortion, family breakdown, sexual liberalism, or religious hostility – is only compounding the problem.”[pullquote] See? You’ve just got to self-control yourself. Unless you’re gay, then Perkins wouldn’t mind personally controlling you by thwarting your attempt at full civil rights. [/pullquote]

See? You’ve just got to self-control yourself. Unless you’re gay, then Perkins wouldn’t mind personally controlling you by thwarting your attempt at full civil rights. But guns, well, numbers indicate that people are very good at killing each other with guns all the live long day like we live in a god forsaken war zone. That is working out really well for us.

Gloating about the gun control failure, Perkins sneers, “Senate liberals, who baited members with a gallery full of Newtown and Aurora families, quickly learned that it would take more than emotional manipulation to win leaders to their side.”

Ah, yes, Newtown and Aurora families. Those manipulative bastards, shoving their dead in our faces. What they don’t understand is that “Right to Life” ends as soon as you check out of Hotel Uterus. After that, you’re on your own. So there’s no point in focusing on a bunch of dead kids when there are real live gun owners with rights to protect. In other words, stop trying to win Perkins over with an emotional argument. As we’ve already discussed, the man has no heart.

If murdered children aren’t a Christian concern, guns, clearly, are. “As Christians living in very dangerous times, we not only have a right – but a responsibility – to protect our families from threats of violence, which only increase as America’s focus moves from personal control to more government control,” Perkins writes.

“There seems to be this notion, at least among liberals, that more laws will protect us – but as we all witnessed in Boston, that isn’t necessarily the case,” Perkins writes. “Stronger background checks wouldn’t have prevented the deaths of three people at the finish line [in Boston].” [pullquote]Second, pointing out that tougher gun control laws wouldn’t have stopped the bombing at the Boston Marathon is ludicrous.[/pullquote]

First, I call your attention to Perkins’ notion that it’s liberals who believe “that more laws will protect us” and his warning of a movement “from personal control to more government control” and add: ROTFLATSHOIA (rolling on the floor laughing at the sheer hypocrisy of it all). This from a guy who supports all manner of anti-gay laws, many of them antithesis to the “small government” conservatives like Perkins pretend they favor, in the name of “protecting” society.

Second, pointing out that tougher gun control laws wouldn’t have stopped the bombing at the Boston Marathon is ludicrous. It’s like saying, “Well, wearing a seatbelt won’t prevent cancer, so why bother?” Such an argument is what the Founding Fathers used to call “asshatery.”

Also, according to Perkins, Jesus wants you to have a gun: “Not only did Jesus tolerate weapons, he instructed His disciples to buy them! In Luke 22:36, we read, ‘He said to them… if you don’t have a sword, sell your cloak and buy one.’”

I should point out that the modern translation of the word “sword” is “assault weapon with high capacity magazine,” which is, obviously, the answer to the age-old question: What Would Jesus Shoot?