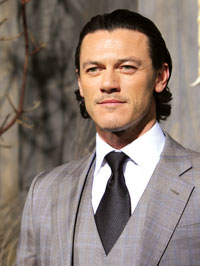 Clea DuVall in the director’s chair

Lesbian fan favorite Clea DuVall, star of Argo, American Horror Story and, back in the day, the queer indie cult hit But I’m A Cheerleader, is stepping into a new role: director. She’ll take the reins for an untitled feature film currently in pre-production. The cast is set – Melanie Lynskey (Togetherness), Natasha Lyonne (Orange is The New Black, and DuVall’s Cheerleader co-star), Jason Ritter (Parenthood), Alia Shawkat (Arrested Development) and Cobie Smulders (Avengers) – and apparently so is the original script, written by DuVall, but nobody’s talking about that just yet. That’s right, fanticipators, no title and no plot details, the way they did it before the Internet spoiled everything all day long. You’ll just have to wait. Unless you’re down with Hollywood’s power-lesbian In Crowd, that is; they probably know all about it by now.

Here come three new Luke Evans movies, Three Seconds, High Rise and SAS: Red Notice. Unsurprisingly, they are all action thrillers about one crime or another, with co-stars like David Oyelowo, Tom Hiddleston and Elisabeth Moss. That’s where this rising star lives, usually, in the land of The Fast and the Furious films and big action spectacles like The Hobbit movies. But what makes Evans unusual is that he’s navigating action film stardom as a gay actor. You may remember him as the actor who was totally out of the closet, then shoved back in by weird marketing/publicity folks, and who is now kinda-sorta re-emerging from that bizarre moment. Either way, it’s fairly unprecedented for any openly gay actors to continue being cast as top-tier talent in the tough-guy action genre, so this man with a lot on his plate is something of a pioneer, no matter how PR-challenged his journey has been. The three films are in various stages of production, so look for them sometime in 2016, around the moment when his turn as Gaston in the live-action version of Disney’s Beauty and The Beast hits theaters. Yes, the tough guy sings, too.

“We had faces,” said Gloria Swanson in Sunset Boulevard, describing her long-ago glory days as a silent film siren. Well, they still have them, but silent films – The Artist, notwithstanding – aren’t exactly on anyone’s green-light agenda in 2015. This makes it the perfect time for a film like Gutterdammerung to stand alone in the spotlight. Already being referred to as the “loudest silent movie on Earth,” it’s a project from Belgian-Swedish director Bjorn Tagemose and will be scored with some very loud rock music, but no talking. It’s about Satan’s guitar, naturally, and it will star Iggy Pop as a punk-rock angel, Henry Rollins as a priest, and Jesse Hughes from indie band Eagles of Death Metal. The film will also feature towering, glowering, gay icon Grace Jones – speaking of giving good face – as a supernatural entity that controls all the testosterone in the rock ’n’ roll world. Perfect casting. We can’t wait.

Usually, we like to keep you informed about what’s coming soon. But sometimes projects – gay sitcoms from China, for example – don’t have a lot of buzz surrounding them until they hit and make a noise heard round the world. That’s what’s happening with Rainbow Family, China’s first sitcom focusing almost entirely on gay characters (Think broad comedy like Will & Grace, but in Mandarin). It’s about a young, closeted, gay man in graduate school (actor Xie Kezan), his “flamboyant” roommate, and his best queer friends. Sounds groundbreaking, right? Well, it is, which is why the Chinese government banned it from TV. Now, if this were 20 years ago, everyone would be out of luck and the entire project would become a hard-to-find urban legend. But because of the magical invention called the Internet, the series (with helpful English subtitles) has earned over 24 million views online, censorship be damned. To quote the song, you can’t stop the beat. Go check it out and beef up those numbers.

*Romeo San Vicente web series got three dozen views. He likes to think of it as a highly exclusive audience. He can be reached care of this publication or at DeepInsideHollywood@qsyndicate.com.