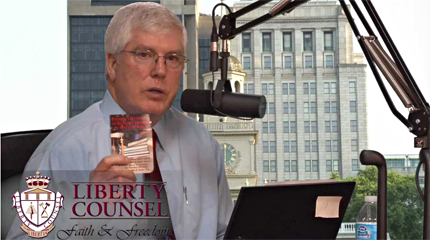 When You’re Dealing With A Hate Group, Dishonesty Is Par For The Course

Kim Davis, the Kentucky country clerk who was jailed for refusing to issue marriage licenses to same-sex couples, is embroiled in yet another media firestorm following revelations that reports about her private meeting with Pope Francis during his recent visit to the U.S. may have been grossly misrepresented by her and the legal group representing her, Liberty Counsel. But the controversy should come as no surprise to those familiar with Liberty Counsel, which has a reputation for lying in order to elevate its profile and further demonize LGBT people.

Florida-based Liberty Counsel was founded in 1989 by its now-chairman, Mat Staver. For years, the organization has distinguished itself as one of the anti-gay right’s most extreme and blundering legal groups, taking on doomed efforts to defend harmful “ex-gay” therapy and slow the inevitable advance of marriage equality. [pullquote]They’re not just ideologically extreme—dishonesty, exaggeration, and propaganda are core components of their brands. Given how frequently hate groups like Liberty Counsel lie about LGBT people on a daily basis, media outlets should anticipate that same level of dishonesty when they’re the subject of major news stories, and treat them accordingly.[/pullquote]

Before it began representing Davis, Liberty Counsel was perhaps most notorious for representing Lisa Miller. After ending a same-sex relationship with her partner, Miller took their daughter and moved to another state, defying a court order and refusing to allow her former partner to see the child. Liberty Counsel rallied to Miller’s defense, creating a public relations nightmare for itself when Miller subsequently kidnapped the child and fled the country.

In addition to Davis, the group is also defending Scott Lively,  an American evangelist facing charges of “crimes against humanity” for his involvement in promoting Uganda’s extreme anti-LGBT law, which threatens gay Ugandans with life in prison.

Apart from its ham-handed legal work, Liberty Counsel is a run-of-the-mill anti-gay group that regularly makes asinine and hateful proclamations about the LGBT community. Liberty’s Staver has linked homosexuality to pedophilia and disease, and predicted that marriage equality could cause society to “cease to exist.” In 2014, the Southern Poverty Law Center (SPLC) added Liberty Counsel to its list of anti-gay “hate groups.”

The Kim Davis marriage-license story offered Liberty Counsel an opportunity to capitalize off of the national media spotlight trained on the law-breaking clerk – a chance for it to raise its visibility and carve out a niche for itself alongside more successful anti-LGBT legal organizations. Staver became a regular fixture in the media’s coverage of Davis, cited in nearly every major mainstream media report about the controversy.

But that increased media attention also brought with it increased media scrutiny and vetting, especially as it become clear that Davis would face jail time for refusing to do her job. Commentators began openly wondering whether Liberty was cynically taking advantage of Davis to raise its profile. Others noted Liberty’s penchant for pursuing dead-end, extreme anti-gay litigation. Even on Fox, media figures were suspicious of Staver’s arguments and intentions. A panel of Fox commentators mocked Staver’s “ridiculously stupid” suggestion that Kentucky isn’t bound to follow the Supreme Court’s orders. In an interview with Staver, Fox’s Neil Cavuto seemed sincerely perplexed by Staver’s legal reasoning, admitting he was “thoroughly confused” by the end of the segment.

That doubtfulness about Staver and Liberty Counsel’s credibility turned out to be well-warranted. Since Davis’ release from jail, Liberty Counsel has been embroiled in several PR controversies, almost exclusively attributable to Staver’s own incompetence. During the September 17 edition of Liberty Counsel’s Faith and Freedom broadcast, Staver claimed that the hosts of ABC’s The View had called for Kim Davis to be killed, a blatant falsehood he was later forced to apologize for.

Faux crowd that Liberty Counsel said was 100,000 prayer rally for Kim Davis, which wasn’t true either

A few weeks later, while speaking at the conservative Values Voter Summit, Staver displayed a picture of what he claimed was a 100,000-person prayer rally in Lima, Peru for Davis. The photo was met with immediate suspicion from media commentators, who could find no evidence on social media that such a massive rally had taken place. After days of doubling down, attacking its critics, and revising its defense of the photo’s authenticity, Liberty Counsel was forced to admit that the image actually came from a completely unrelated event in 2014, calling the mix-up “an honest mistake.”

And then came Pope Francis’ visit to the United States. On September 29, Liberty Counsel announced that the pope had met privately with Davis in Washington, DC to thank her for her “courage” and encourage her to “stay strong.” In interviews with major media outlets, Liberty Counsel depicted the meeting as a de facto endorsement of Davis’ case, telling CBS News that the meeting “sends a huge message worldwide that [the pope] stands for the inherent right of religious freedom.” Staver also told CNN’s Jake Tapper that the pope “did encourage [Davis] for standing.”

But on October 2, the Vatican released an official statement clarifying that the meeting was not an endorsement of Davis’ case:

Pope Francis met with several dozen persons who had been invited by the Nunciature to greet him as he prepared to leave Washington for New York City. Such brief greetings occur on all papal visits and are due to the Pope’s characteristic kindness and availability.

The Pope did not enter into the details of the situation of Mrs. Davis and his meeting with her should not be considered a form of support of her position in all of its particular and complex aspects.

One official said there was “a sense of regret” at the Vatican over the meeting, while an advisor close to Pope Francis tweeted that the pope was “exploited” by a “meeting that never should have taken place.” Liberty Counsel has responded by disputing the Vatican’s description of the event, effectively throwing more fuel on the media fire.

Liberty Counsel’s recent PR crises aren’t anomalies—they’re characteristic of an organization run by a man whose only real claim to fame is spewing vitriol and championing fringe, losing legal battles against LGBT equality. LGBT activists who have followed Liberty Counsel’s work for the past several years probably aren’t surprised that the group is again embarrassing itself in the national media’s spotlight. But major news outlets, which have largely been reluctant to dig in to Liberty Counsel’s history of extremism, are less likely to treat the group with the skepticism and hesitance that it deserves.

To be fair, this problem isn’t unique to Liberty Counsel—a number of extreme anti-LGBT hate groups have duped the media into taking them seriously. As LGBT equality becomes less and less controversial, media outlets have a shrinking number of radical anti-gay charlatans to rely on as representing the voice of the opposition. And in the case of Kim Davis, Liberty Counsel has cast itself as a central character in the drama.

Staver’s repeated missteps and embarrassments are a worthwhile reminder of why these kinds of organizations are labeled “hate groups” in the first place. They’re not just ideologically extreme—dishonesty, exaggeration, and propaganda are core components of their brands. Given how frequently hate groups like Liberty Counsel lie about LGBT people on a daily basis, media outlets should anticipate that same level of dishonesty when they’re the subject of major news stories, and treat them accordingly.