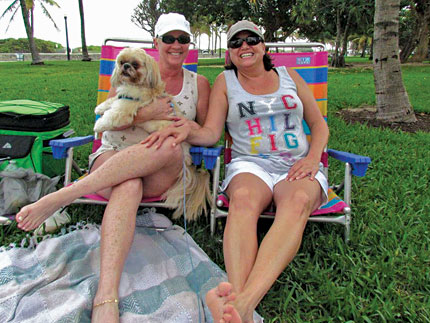 Miami, Fla.—The legalization of same sex marriages in Florida, many attest, is remarkable. The definition of marriage is no longer restricted to that given to it by religious groups. Because of it, this ruling is one of the biggest civil rights feats of this generation. In Florida’s case, Attorney General Pam Bondi led a very lengthy and relentless campaign against same-sex marriage, but the court made a final judgment in its favor. Nationwide, by the many rulings in favor of marriage equality, it can no longer be denied that marriage is a civil institution with built-in benefits; one that should not be defined with religious terminology, but in terms of full citizenship.

For this historical moment, TRT wanted to interview a couple from the area. To that effect, Monica Cernadas, 48, and Natasha Parefs, 52, from Kendall, FL were sitting on their beach chairs, across from Palace Bar, an iconic Miami Beach spot on Ocean Dr. They were holding hands while crossing the street when this Florida correspondent decided to approach them.  Immediately, we asked them about the decision and the upcoming date: January 6th.

Viviana Valiente: How do you feel now that same sex couples can get married in FL as of January 6th?

Monica Cernadas: We have been together for 27 years; we don’t need a piece of paper, but what if something happened to one of us. Marriage has its benefits.

Q: Do you think businesses will be reluctant to offer services for same-sex weddings?

A. We are in the flower business; this might be good for the economy, with all the new weddings, etc.

Q: Do you expect opposition to the ruling on January 6th?

Natasha Parefs: I don’t think they are going to oppose it any more. I think they have tried so hard—it’s done. They can’t stop it. Attorney General Pam Bondi said she won’t fight it. She made it her biggest issue to get votes, but at the end, she lost.

Attorney General Pam Bondi has stated via numerous media outlets that she will not oppose Judge Robert Hinkle’s decision to make it obligatory for clerks of courts in all FL counties to issue marriage licenses to same-sex couples, as of January 6th. According to some local people who requested anonymity, opposition may be expected from religious groups such as Florida Family Action. FFA has already filed a lawsuit for an emergency injunction. In addition, a number of counties will end all courthouse weddings so that they don’t have to marry same-sex couples.

This Florida correspondent’s feelings can be summed up by: “So, who cares, we can get married at the beach. Those are just delay tactics that will not stop same-sex marriages from happening, soon, from January 6th and on.”

And since then, that has been the case. Florida couples have married without a problem in Florida. Videos and photos of such first few marriages can be seen via Equality Florida’s site.