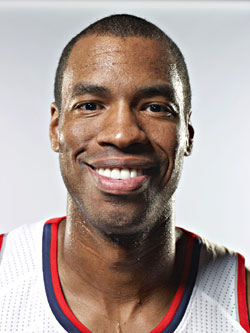 After coming out in April 2013 as the first openly gay athlete of any major professional American sports league, Jason Collins decided to retire in November 2014. His career highlights include being the 18th overall pick in 2001 by the Houston Rockets in the National Basketball Association (NBA) draft, and making the NBA Finals in his 2002-2003 season with the New Jersey Nets. At 36 he has played 13 seasons in the NBA, 10 of which he was joined by his twin brother, Jarron. Recently the 7 foot, 255 pound athlete took a moment to catch up with The Rainbow Times.

Q: Are you based out of the west coast these days?

A: Yeah, I live in Los Angeles. [I was] born and raised here in LA. I’ve had my house here for about eight years, so I try to stay in L.A. as much as possible, but because of all that I do, I do travel quite a bit. In fact, I’m getting on a plane tomorrow to go to Sundance [Film Festival], so that will be fun.

Q: Playing on so many teams around the country, if there was second place aside from L.A. that you’d want to live, where would that be?

A: Well I’m all about good weather and I think in my career I’ve had enough bad weather to last. I mean, I’ve seen enough snow … I really like the vibe in Miami. It’s a lot of fun, a lot of good people, and I love the culture there. It’s a very diverse community, and I love diversity. (laughs)

Q: Growing up having a brother who was passionate about the same sport, what was it like having that competitive aspect and how important was it that you two went to the same college?

A: We always wanted to go to the same school and our grandmother always had the motto about, “strength in numbers.” So, we were always going to be a package deal. There were schools when we were being recruited that only wanted one of us, so we had to tell those schools, “Thanks, but no thanks,” kind of deal. Having a twin brother just can push you to continue, especially in the same sport and same profession. There’s always going to be that sibling rivalry. Our parents tried to have us on the same team so that we really got the team concept—that it isn’t about the individual. But then, at the same time, when you’re practicing against someone, another future NBA player, going up against another NBA caliber player like my brother, it made me better; I’m sure that I made him better … He played 10 years in the NBA and I played 13 years, so it worked out.

A: When I made my announcement in the spring of 2013 coming out publicly, I knew I had to train. I knew that I might only get one opportunity again to play in the NBA. So, all the training that went into it, it was mentally tiring. (laughs) It’s sort of like, you know, the same situation Michael Sam is going through right now, where you just have to train. You don’t know when that opportunity is coming, but you do know when that opportunity does come you have to be ready. I didn’t want to put myself through that type of training again because, you know, as physically demanding as it was, which it is, another side that we don’t talk about is the mental challenge of it. I just didn’t feel like putting myself in that position, and plus my body was talking to me that it was time. You know, I’ve had six surgeries, and back issues, and all the things that come with playing a long career in professional sports. So, I got to a point over the summer where it was like, “Well what else can I do?” I really wanted to keep a foot in the world of basketball. I approached some folks at the NBA, and we were able to work together and now, obviously I’m an NBA Cares ambassador.

Q: So since you announced your retirement, has your life been different in ways that you didn’t expect?

A: My relationship with my religion. I have always believed in God, but my issue was always with, sometimes, who was delivering the message. Sometimes people use religion as a way to be a wedge issue. I believe religion should be something that unites and brings people together. I wasn’t expecting it, but I actually found a church here in Los Angeles that preaches that exact message: it’s all about community, it’s all about accepting people for who they are, and, you know, just that love is what it should all be about. So, I wasn’t expecting that. I went with a friend over a year ago. I ended up finding this place and I’m extremely happy.

Q: Do you have any passions that you weren’t able to pursue before, but you are now?

A: My passion is tennis. I love tennis. That’s my new sport, that’s my new hobby, and I play as much as I possibly can.

Q: Did you join a club nearby?

A: Oh yeah! I’m a member at a club here in Los Angeles. It’s fun. You can run around, get a good workout, and then it’s social. It’s fun, and not only to play it, but I love watching sports as well. I went to Wimbledon for the first time this summer. Again, that added to my thoughts about retirement, because while it was my first time going to London, it was my first time going to Wimbledon and I was thinking, while I’m here, you know, firsts are out there for me to experience in a great and wonderful way…I also went to the U.S. Open, and I’ve been in the past to the French Open. So, I just need to go to the Australian Open. Maybe next year I’ll have my career spectating grand slam.