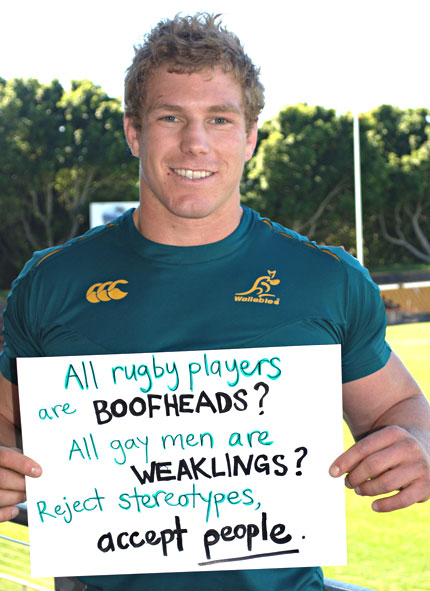 The first international study on homophobia in sport, launched today, is set to shine a light on how often gay, lesbian and bisexual people face discrimination on and off the playing field. Researchers will also, gather ‘national data’ for the USA and the compare the United States with other countries. This will show which countries have sporting cultures that are the most ‘welcoming’ to same-sex attracted people. The study is being launched in the wake of controversy around Michael Sam’s draft and ahead of the
International Day Against Homophobia and Transphobia on Saturday, May 17.

Wales Rugby legend Gareth Thomas, who came ‘out of the closet’ in 2009, is one of many well-known athletes encouraging people to take part. “Many athletes around the world fear they won’t be accepted by their teammates and others if they are honest about their sexuality. I was one of those athletes and I wish, at the time, I understood how many other people were experiencing the same thing.

“Out on the Fields” was initiated by organizers of the Bingham Cup Sydney 2014, the world cup of gay rugby, in partnership with the American anti-homophobia charity You Can Play Project. The research will be conducted and results collated by the international sports research firm, Repucom and then analysed by the team of academics. Results of the study will be released prior to the Bingham Cup tournament at the end of August this year.

Andrew Purchas is an openly gay rugby player with the Sydney Convicts, who has played in the USA and Australia, as well as President of the Bingham Cup Sydney 2014. He said, “I am often asked by media, governments and others about the prevalence of homophobia in sports, such as insults and abuse, particularly in very masculine team sports such as American football, or rugby. But it’s a difficult question to answer, beyond anecdotes, because there has been very little research on the issue. We want to change this, so that homophobia in sport no longer remains hidden or ignored.”

Patrick Burke is President of the You Can Play Project, which is a charity working with major sporting organizations and athletes to make sport welcoming and accepting for all. He said, “In recent years, we’ve seen courageous men and women play the sports they love while acknowledging their sexual orientation and gender identity. Yet we continue to hear stories of athletes who remain closeted because they fear discrimination by teammates and fans.

“This project is exciting because it provides hope that the results can help document the pace of change around the world. I’m hopeful we’ll find out that homophobia is less of an issue than many people think and it’s often fear that prevents people from coming out of the closet. Everybody with family and friends who care about sport should encourage people to participate in the research,” said Burke.

Those interested in participating are asked to visit www.outonthefields.com to take a short survey. The study is open to everyone regardless of sexuality, and the views around homophobia among ‘straight’ people will be compared with those who are GLBT.

About the Bingham Cup
The 2014 Bingham Cup, the world cup of gay rugby, is being held in Sydney from August 24 to 31. The event’s Principal Partners have helped to make this research possible. This includes Commonwealth Bank and Telstra and our Strategic Partner is Destination New South Wales. The Bingham Cup is a biennial tournament and is being hosted by the Sydney Convicts in partnership with the Melbourne Chargers and Brisbane Hustlers (Australia’s other gay rugby union teams). Approximately 2,000 players and direct supporters are expected to attend as well as international gay media. The competition is named after Mark Bingham, a member of the San Francisco gay rugby union team who died on United Airlines Flight 93 on September 11. It’s believed he was one of the passengers who tackled the terrorists on-board, causing the plane to crash in a field. The Bingham Cup challenges stereotypes and perceptions of gay men.