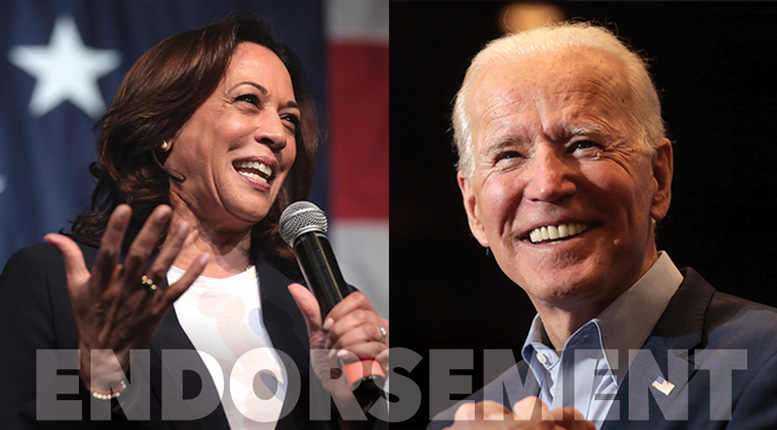 Joe Biden and Kamala Harris for President and Vice-President, an Endorsement

There is rampant chaos everywhere in the nation—something that has never been seen or experienced by this generation and likely generations to come. People, hundreds of years from now will read about this—the darkest period in American history—in awe. They will read in astonishment and horror, not understanding how bad it was for all of us who lived it. And they will judge our actions and inaction. They will look at the murders under Trump, those from COVID, from white supremacy, from boasting police brutality toward blacks and immigrants, for keeping children in cages separated from their families, while they died alone. They will read about the unauthorized mass hysterectomies performed on immigrant women and question our sanity and the sanity of other legislators who apparently did nothing to stop him/them. They’ll study the 25th Amendment and will wonder how and why it wasn’t invoked since so many American lives were at peril.

“Editors at the world’s leading medical journal said the Trump administration ‘took a crisis and turned it into a tragedy.’” The New England Journal of Medicine, N.E.J.M., has remained nonpartisan through all of its 208 years of existence. Today, it stopped that legacy of remaining objective—and it condemned Trump and it endorsed Joe Biden.

Titled “Dying in a Leadership Vaccum”, the editorial (published on October 7, 2020), slams the U.S. leadership (federal, statewide and local) and called it “dangerously incompetent.”

“Covid-19 is an overwhelming challenge, and many factors contribute to its severity. But the one we can control is how we behave. And in the United States, we have consistently behaved poorly. …” read parts of the NEJM experts’ piece.

“The United States came into this crisis with enormous advantages. Along with tremendous manufacturing capacity, we have a biomedical research system that is the envy of the world. We have enormous expertise in public health, health policy, and basic biology and have consistently been able to turn that expertise into new therapies and preventive measures. … Yet our leaders have largely chosen to ignore and even denigrate experts. The response of our nation’s leaders has been consistently inadequate. The federal government has largely abandoned disease control to the states. Governors have varied in their responses, not so much by party as by competence.”

In an interview with CNN, Dr. Eric Rubin, its editor in chief, said that they (with the medical authority and expertise they hold) “call on voters to oust the current U.S. leadership.”

It exhorted Americans not to re-elect the leaders that have not taken swift action to avoid American deaths, and Dr. Rubin said to CNN this involves the “governors” and other leaders that have allowed this to happen, “to the extent that it has.” This entire breaking news all taking place while Trump touted via Twitter that contracting the virus was “a blessing from God.”

The NEJM was, in addition, critical of other leaders and while expressing that the vindication would come as they see them held accountable—in a judgment day of sorts. They mention that we can do that. We, as the voters can do that. We can send that unanimous message to all of them when we vote Blue.

We, at The Rainbow Times, have condemned Trump and Trump-like politics at the national, state and local levels from day one. And, we stand by such a stance. Furthermore, we call on the LGBTQ+ and allied community to cast their vote for Joe Biden and Kamala Harris and in state and local races, to vote blue, as blue as the water of the sea and the calm that we’ll all feel once this chaos is over. 400,000+ people are supposed to die by the end of the year. If that is not enough for you, our reader, then we don’t know what is. What we do know is that we will cast our vote for them—to save America and to save American lives. We know history will be watching and we will stand on the right side of it once again, unequivocally and unalterably.

The question is, will you vote, and will you vote blue? We, as well, have broken our almost 15-year-old history to be more objective in our presidential endorsements—we’ve never endorsed a party in its entirety. We must be this forceful this time around. All of our lives depend on it—however many of us remain after Trump and COVID. We wouldn’t be able to forgive ourselves if we didn’t take this stance.

An NYT story about it expressed that the “editorial castigated the Trump administration’s rejection of science,” quoting the N.E.J.M.’s sentence: “Instead of relying on expertise, the administration has turned to uninformed ‘opinion leaders’ and charlatans who obscure the truth and facilitate the promulgation of outright lies.”

And, let’s not forget that marriage equality, LGBTQ+ rights, transgender protections, the right for trans servicemembers to openly serve, the healthcare that many in the community depend on—the Affordable Care Act, ACA—and reproductive rights are all at stake if the Republicans win in their nomination of Judge Amy Coney Barrett, as they try to fill the seat from the beloved and illustrious, the “Notorious RBG! (Justice Ruth Bader Ginsburg)” Vote, because your life and rights depend on it. A vote for Joe Biden and Kamala Harris will help our community tenfold because, after all,  all of our lives and the lives of loved ones depend on it.

Stay safe, for your loved ones’ sakes, and for your own.