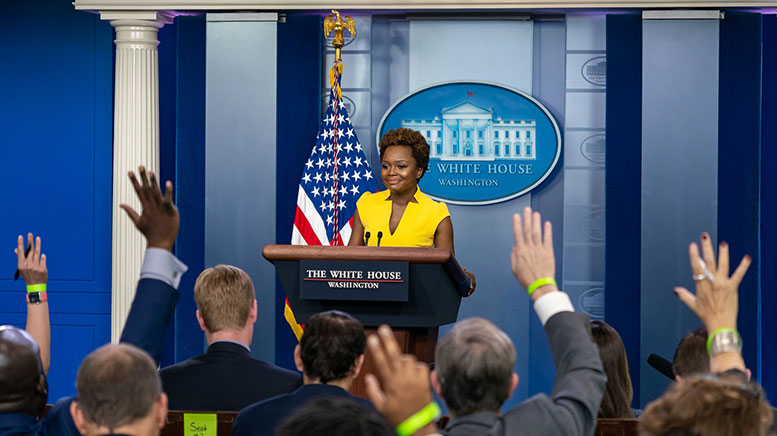 Late last evening, President Biden announced Karine Jean-Pierre will be the next White House press secretary, starting on May 13, following the departure of Jen Psaki next week. Jean-Pierre will make history as the first Black and first openly LGBTQ+ person to serve in this position ever, according to the White House.

“I am proud to announce that Karine Jean-Pierre will serve as the next White House Press Secretary,” said the President via the White House release. “Karine not only brings the experience, talent, and integrity needed for this difficult job, but she will continue to lead the way in communicating about the work of the Biden-Harris Administration on behalf of the American people. Jill and I have known and respected Karine for a long time and she will be a strong voice speaking for me and this Administration.”

Organizations throughout the country immediately reacted to the news.

“The White House Press Secretary represents the voice of the President of the United States and the American people, and for the first time in our nation’s history, that voice will be the voice of a person who is both Black and openly same-gender loving,” said Dr. David J. Johns, executive director of the National Black Justice Coalition. “It’s about time — and we celebrate this moment. … “Make no mistake — at a time Black people, and members of the LGBTQ+ community are under attack — having a strong, openly Black same-gender loving woman as the voice of the White House and our nation sends a clear signal to all — that our nation is better when we embrace who we are. Thank you Karine.”

Likewise, the Victory Institute’s president had congratulatory words to say about Jean-Pierre.

“As White House press secretary, she will not only be able to use her podium to represent the Biden administration, but also the LGBTQ community during a time of unprecedented anti-LGBTQ hate and attacks,” said Mayor Annise Parker, President & CEO of LGBTQ Victory Institute. “As the first out LGBTQ person and the first Black person to hold this office, her appointment will inspire countless young people looking for hope and motivation during a dark chapter in our nation’s history. Shattering this lavender ceiling is a testament to Karine’s grit, power, and commitment to our country’s potential. We are confident she will continue to be a strong ally and partner as she works in the highest office of the land.”

Before joining the White House, she served as chief of staff for vice presidential nominee Kamala Harris in the 2020 United States presidential campaign. In that capacity, she was also the first out LGBTQ woman and first Black woman to hold that position, according to the Victory Institute.

Prior to her role on the campaign, she served as Chief Public Affairs Officer for MoveOn.org and an NBC and MSNBC Political Analyst. Jean-Pierre served as Regional Political Director for the White House Office of Political Affairs during the Obama-Biden administration and as Deputy Battleground States Director for President Obama’s 2012 re-election campaign. She served as Southeast Regional Political Director for President Obama’s 2008 campaign, Deputy Campaign Manager for Martin O’Malley for President, Campaign Manager for the ACLU’s Reproductive Freedom Initiative, and Deputy Chief of Staff and Director of Legislative and Budget Affairs for two members in the New York City Council.

Previously, she worked at the Center for Community and Corporate Ethics, pushing major companies to change their business practices, and is a published author. Born in Martinique and raised in New York, Jean-Pierre is a graduate of Columbia University.