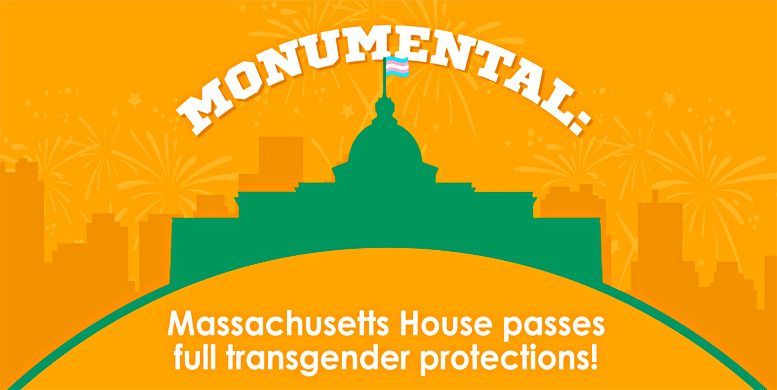 BOSTON—Today by a vote of 116-36, the Massachusetts House of Representatives passed HB 4343, the bill that would update state law to ensure explicit protections for transgender people in public places, including parks, restaurants, hospitals, and public restrooms. The bill also passed the Senate overwhelmingly and with bipartisan support on May 12. It now heads to conference committee to reconcile the two versions of the bill, and will then go to Governor Charlie Baker’s desk.

Massachusetts is the first state since 2014 to pass a bill ensuring explicit protections for transgender people in public spaces. Different versions of the bill have been pending in the Massachusetts legislature since 2007.

“Today, Massachusetts lawmakers showed tremendous courage and leadership in support of the transgender community and their loved ones,” said Carly Burton, campaign manager of Freedom Massachusetts, the bipartisan campaign working to pass the bill. “This law will help ensure dignity and respect for transgender people and allow them to more fully thrive in Massachusetts. Today’s victory would not have been possible without the brave voices of transgender people who have been telling their stories and educating lawmakers for decades. In a national landscape where transgender people are too often attacked forwho they are, Massachusetts is a model example for other states across the country. We look forward to seeing this legislation arrive at the governor’s desk for his signature as soon as possible.”

“We are thankful to Speaker DeLeo, Chairman Fernandes, Representative Rushing, and Representative Provost for their unwavering commitment to moving this bill forward and working diligently over the past months to be sure legislators did the right thing,” said Mason Dunn, co-chair of Freedom Massachusetts. “We are also thankful for all the legislators — Democrat and Republican — who voted in favor of the bill.”

Freedom Massachusetts has recruited and secured endorsements on the bill from more than 250 businesses, more than 350 clergy and congregations, 11 labor unions representing more than 750,000 families, 16 statewide women’s and victim’s advocacy groups, every major professional sports team in New England, the state’s leading law enforcement associations, the entire MA congressional delegation, the state attorney general, bipartisan leadership in the House and Senate, public endorsements from both the Senate President and the House Speaker, and more.

Republican Governor Charlie Baker yesterday announced that he will sign a version of the bill when it reaches his desk.

The bill’s lead sponsors in the House of Representatives are Byron Rushing and Denise Provost, along with Sonia Chang-Diaz in the Senate.

To thank the State Representatives who voted to advance the bill click here.

Today, the Massachusetts Legislature voted to pass “An Act Relative to Transgender Anti-Discrimination,” which will prohibit discrimination on the basis of gender identity in public places. Fenway Health President and CEO Steve Boswell MD, FACP released the following statement in response:

“We applaud the Massachusetts Legislature for taking this important step forward in extending civil rights protection to all citizens of the Commonwealth. There is a clear connection between civil rights protections for a minority population and their health. Fenway is pleased to have contributed to this important discussion in Massachusetts through Project VOICE, a research project showing the prevalence of public accommodation discrimination experienced by transgender people in Massachusetts. Project VOICE also showed that discrimination in healthcare settings was associated with an increased risk of symptoms of poor health, as well as an increased likelihood to postpone or not seek needed care when sick or injured. We look forward to final approval of this law from Governor Charlie Baker and its implementation, which will increase public health in the Commonwealth, particularly for transgender people.”

“Today, the Massachusetts House joined the Senate in taking an important step toward ensuring the stain of discrimination against transgender people is a relic of the past. This vote demonstrates that our state is a welcoming one that values all people. I commend Speaker DeLeo, Senate President Rosenberg, Sen. Chang-Diaz, Reps. Fernandes, Dempsey, Rushing and Provost, and all who supported this measure. I look forward to seeing a final bill negotiated between the Senate and House that maintains strong protections, and the measure being signed into law.”

Bump has been a strong advocate for equality in Massachusetts. As a member of the House of Representatives in 1989, she supported legislation to prohibit discrimination based on sexual orientation. Early in her term as Auditor, she championed stronger anti-bullying protections in Massachusetts schools. Last year, she submitted a letter in support of legislation similar to the bill passed today.

About the Office of the State Auditor
The Office of the State Auditor conducts performance audits of state government’s programs, departments, agencies, authorities, contracts, and vendors. With its reports, the OSA issues recommendations to improve accountability, efficiency, and transparency. The OSA has identified more than $1 billion, including $624 million within MassHealth, in unallowable, questionable, or potentially fraudulent spending and saving opportunities for the Commonwealth since 2011. Auditees have implemented 95 percent of the OSA’s recommendations.

Today, the Massachusetts Legislature voted to pass “An Act Relative to Transgender Anti-Discrimination,” which will prohibit discrimination on the basis of gender identity in public places. AIDS Action Committee Executive Director Carl Sciortino, who originally filed the bill in 2011 when he was a state representative, released the following statement in response:

“Being free from discrimination in public spaces is a basic civil right, and passage of this bill is a tremendous step forward in advancing equality for transgender residents of the Commonwealth. I am honored to have been in a position to back this bill as a lawmaker, and I’m particularly proud to have continued that advocacy with AIDS Action, which belonged to the coalition of social justice, healthcare, and business organizations that supported this bill.

“It has long been established that civil rights protections have a positive impact on health. Transgender people have disproportionately higher rates of physical and behavioral health issues, and experience much higher rates of HIV infection than the general population. AIDS Action looks forward to the signing of this bill by Governor Charlie Baker, and its subsequent implementation and positive impact on the lives of transgender residents of Massachusetts.”

The ACLU of Massachusetts released the following statement:

“Today, the Massachusetts House of Representatives voted in favor of An Act Relative to Transgender Discrimination (HB 4343), which would protect transgender people from discrimination. This historic vote brings us another step closer to protecting the rights of all residents and sends a powerful message that our state is a place of equality, opportunity, and community.

“The ACLU of Massachusetts extends special thanks to Speaker DeLeo and Representatives Rushing, Provost, and Fernandes. Their impassioned leadership has been crucial to the passage of this bill.

“We hope that the Conference Committee will produce a final piece of legislation Bay Staters can be proud of.”

“MassEquality applauds the House of Representatives’ vote to pass HB 4343 today, and joins the transgender community in celebrating this milestone in transgender rights in Massachusetts. The bill passed by a veto-proof majority of 116-36. This historic vote clears the way for full anti-discrimination protection for transgender people across Massachusetts, and is a significant victory in the face of the disturbing trend of legislation targeting transgender people and undermining their basic civil rights being introduced in states and municipalities across the country.

“We extend our sincere thanks to Speaker of the House Robert DeLeo and bill co-sponsors Denise Provost and Byron Rushing for their strong support of the bill and their leadership on this important issue. We also thank the 116 Representatives who voted today to extend the Commonwealth’s anti-discrimination law to cover transgender people and finally close the glaring gap in legal protection that was left open with the signing of the Transgender Equal Rights Law in 2012. With their vote, they have affirmed the principle that discrimination has no place in Massachusetts.”

A great day for equality, many thanks to all who worked tirelessly to pass #TransBillMA https://t.co/2M1AWOT4jp

#TransBillMA will enshrine in law a recognition of the dignity and humanity of transgender people https://t.co/Kls1aHlkC1 @JenniferLevi1

116-36, a veto proof majority for #TransBillMA! It's been a long road for those waiting for protection under law.

Hallelujah! And by a veto proof majority (although Gov Baker has already committed to signing it)! #TransBillMA https://t.co/DHbEToXtFe

#TransBillMA we did it. Equal protection under the law. pic.twitter.com/yEkcX0U0SG

#Massachusetts @RepBrodeur tips hat to Lemay family, who have worked on #TransBillMA for years. pic.twitter.com/vvsgrpKm8d

.@DeniseProvost1: My daughters would go to the mat for their transgender friends. So would I. #TransBillMA pic.twitter.com/GW8Xdm9iy9

Inspired by the parents and grandparents who spent today at State House to see #matransbill move huge step toward becoming law.