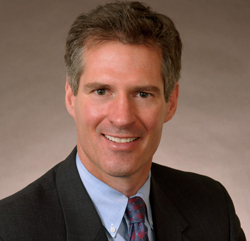 BOSTON, Mass.—During an interview with CNN on Monday, US Senator Scott Brown described the marriage rights of same-sex couples as “settled law” in Massachusetts and dismissed ongoing debate on the issue by saying that Bay State voters have “moved on.”

“With all due respect to US Sen. Scott Brown, the LGBT community in Massachusetts has not ‘moved on’ from the marriage debate because, frankly, it can’t. Marriages of same-sex couples in Massachusetts are still not recognized by the federal government because of the so-called Defense of Marriage Act. In addition to being immoral, this inequality means that married same-sex couples do not have access to many of the safety nets afforded other married couples: social security survivor benefits; Medicaid long-term care benefits; spousal veteran benefits; or rights of inheritance. Bay State voters believe that these families are equally deserving of federal recognition, and they won’t ‘move on’ until all Massachusetts families are treated equally.

“It is convenient for Sen. Brown, who voted four times against equal marriage for same-sex couples when he was a state senator, to encourage voters to look elsewhere when it comes to fairness and equality on this issue. Sen. Brown asserts that marriage rights are a local issue that should be decided without interference from the federal government. However, this position is at odds with a vote he took as recently as 2010, when he voted in favor of a referendum that would have overturned marriage equality in the District of Columbia.

“Sen. Brown is correct, though, when he says that Massachusetts voters care about the economy and taxes. This is especially true for married same-sex couples who live in a two-tiered system that negatively impacts their economic security, and forces many of them to pay higher taxes than their heterosexual counterparts. We encourage Sen. Brown to catch up with Bay State voters and join every other is member of the Massachusetts Congressional delegation in signing on to the Respect for Marriage Act, which would remedy this blatant inequality.”

MassEquality works to ensure that every lesbian, gay, bisexual and transgender person in Massachusetts is protected from cradle to grave—with equal rights and opportunities in school, in marriage and family life, at work and in retirement.