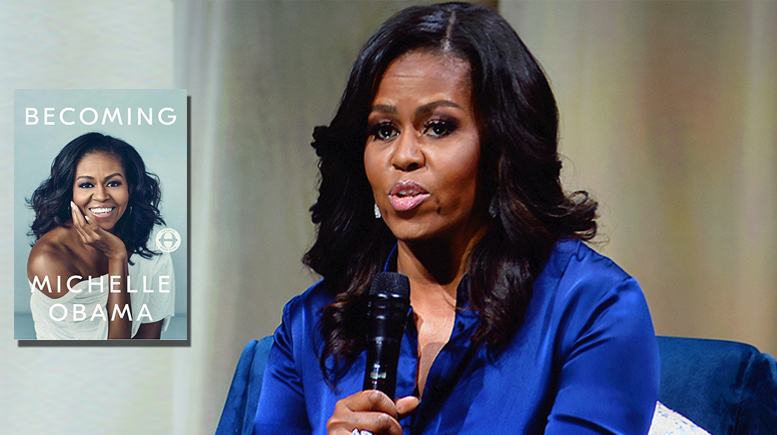 As part of her book tour, Former First Lady Michelle Obama addressed a large audience at TD Garden in Boston this past weekend. “Becoming”, her best-selling book, has sold more than 1.4 million copies since its release on November 13, 2018. Total book sales, including hardcover, audio, and e-books edition, sold around 725,000 copies in the first day, making it the second best-selling debut for any book in 2018.

Ms. Obama spoke with journalist and former NPR host, Michelle Norris, in front of a sold-out crowd of over 20,000 men, women and children of all ages.

She took the stage to the song “Girl on Fire” by Alicia Keys, which set the tone for the evening. During her two-hour discussion with Norris, Ms. Obama boldly shared some of her most private ups and downs in life both before and after her husband became President in 2009.

She encouraged everyone in the audience to take chances and move out of one’s comfort zone. She stressed and how we are “ever-evolving” and how we should approach life as a “zig and zag” path because that’s the journey. She said, “I say this mostly to young women; you’re not supposed to know what you are gonna to be.”

With the wit she is known for, she spoke about what it is like being recognized for former President Barack Obama’s achievements rather than her own. Ms. Obama attended Princeton University, graduating cum laude. She went on to earn a degree from Harvard Law School. After obtaining her Juris Doctor degree, she worked at a Chicago law firm, where she met her future husband. Along the way, she became executive director for the Chicago office of Public Allies, served as associate dean of student services at the University of Chicago, and as executive director of community relations and external affairs, and then as the vice president for community and external affairs at the University of Chicago Medical Center. Ms. Obama has also served as a board member for the prestigious Chicago Council on Global Affairs.

In addition, Ms. Obama spoke about raising her two daughters, Malia and Sasha, in the White House, the importance of making motherhood a priority, and the disappointment she felt over how she was publicly criticized for calling herself “Mom in Chief” while in office.

The former First Lady of the United States kept the audience engaged throughout the discussion. Despite the full house, she was able to engage attendees as if she were having a personal one-on-one conversation within the confines of their own home.

At the end of her motivational discussion, she received a standing ovation and a huge round of applause from the audience. One could not walk away feeling bad about themselves after the experience. If the Former First Lady is still evolving and looking into her next opportunity, then it is “OK” if I, a regular Joe or Jane, is evolving as well.

Ms. Obama’s book, “Becoming,” is written in a prose that is both frank and witty. Published by Crown Publishing Group, “Becoming,” is available at fine booksellers everywhere for the list price of $32.50. Wikipedia’s page on the book states that it will eventually be released in 24 languages. According to the NYT, One million copies will be donated to First Book, an American nonprofit organization which provides books to children.

Ms. Obama will continue her book tour across the United States until the end of December 2018.