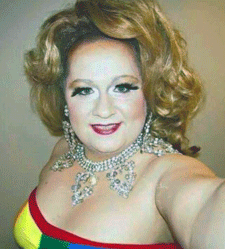 Ariel Maranda Gibbs passed away peacefully at her home in Naples, Maine on Monday August 3rd, 2015 after losing her courageous battle with Stage 4 Oral Cancer.

She is survived by her husband Brian O’Connor. Daughter of Muriel D. Gentley & the Late Eugene H. Gentley Sr. Siblings Jonathan Gentley & Wife Dawn and their 3 boys Taylor James, O’Brian & Connor. Her Sister Sara Gentley, her brothers Eugene Gentley and his wife Jennifer and their children, Ernest Gentley and his children and her baby Sister Spring Grover, her husband Jeff and their 3 children Ryan, Lyesha & Brayden. She is predeceased by her brother Eugene Herbert Gentley Jr.

Ariel was a true entertainer and gave her talents freely to her LGBT community across the country with a primary focus on the New England LGBT Community. She was an active member of the Imperial Court of Massachusetts and was Imperial Majesty Empress X Ariel Maranda De’Veraux of The Imperial Court of Massachusetts as well New York Empress XXV-1/2 & Connecticut Empress MMXII-1/2.

She was blessed to have many loving friends such as Jason Hayes, Kerra Daniels, Edward Powell, Stephanie Whyte, Bambi Baxter, Lakia Mondale & Melinda Wilson to name just a few.

The family has chosen to have a private cremation and service. A Public Celebration of Life will be held on Saturday, October 3rd, 2015. Her Memorial will be held at 11am @ St. Paul’s Cathedral Church 138 Tremont Street, Boston, MA 02111. A mercy meal will follow immediately afterwards at Club Cafe, located at 209 Columbus Avenue, Boston, MA 02116 from 1 p.m. to 4pm.