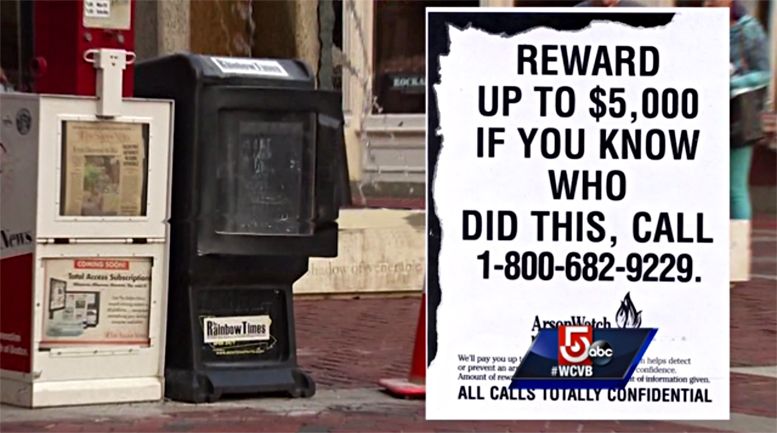 Update (8/27): Join Salem officials and community members as The Rainbow Times resurrects another newspaper box at the very same site of the Salem, MA explosion, on Sunday, Aug. 28th at 7 p.m.

Deemed by the SPD as a hate crime against our LGBTQ & Allied community, TRT stands united in the face of adversity, sending a message to the perpetrators and the world that we too are #OneSalem.

As a symbol of our solidarity and unwavering commitment to the community, TRT officials will gather together to resurrect & unveil another newspaper box at the site of the explosion. We hope you’ll join Mayor Kim Driscoll, The Rainbow Times, city officials and countless others who want to show what it is to be #SalemStrong. #StrongerTogether

Update (o8/26): Today, WCBV News reported that a $5,000 reward has been put out by the Fire Marshall’s Office. The reward is being offered to anyone with information leading to an arrest in connection with The Rainbow Times‘ box explosion. TRT is a monthly LGBT newspaper whose property was blown up this week in Salem.”

In a sign of support and solidarity for The Rainbow Times and the LGBTQA community, the Mayor’s Office, the City of Salem and nAGLY responded by offering 3×5 feet rainbow flags for business owners to display at their establishments. Additionally, a series of these flags were strung from one side of Washington St. to the other at the intersection of where the explosion took place.

“TRT  encourages business owners and individuals who would like to display the rainbow flag and stand in support of our beloved LGBTQA community to make a donation to nAGLY who is distributing these flags,” said Nicole Lashomb, Editor-in-Chief. “We are ever so grateful for the outpouring of support received by the local Salem community, city officials, the Salem PD, the Mass. State Police, the Fire Marshall’s office, the Mayor’s office and countless others throughout New England and the nation.”

A Patch.com interview, the online news source interviewed State Fire Marshal Peter J. Ostrokey who “announced Friday that the Arson Watch Reward Program is offering a $5,000 reward for ‘information that helps to solve the crime of arson.'”

The links below show the support and coverage, local and national, of this hate crime.

STATEMENT FROM THE PUBLISHER

The heart of Salem was disrupted by an explosion on Tuesday at 1:19 a.m. when a group of seven individuals placed explosives in a the newspaper box belonging to an LGBTQ New England publication, according to local officials. The explosion was heard about a mile away.

Police Department Captain Conrad Prosnewski immediately spoke of the incident as a “hate crime,” when the news boxes were first vandalized in June and again on Tuesday morning, as the video was shown for the first time to The Rainbow Times‘ Publisher and Editor-in-Chief, Graysen M. Ocasio and Nicole Lashomb, respectively.

The Publisher released the following statement following the targeted and strategically planned hate crime (see the full video of the explosion here or watch below):

“This act is something that affects Salem as a whole. We were dismayed and astounded by this vitriolic hate crime that happened to The Rainbow Times on Tuesday at 1:19 a.m. The Rainbow Times had experienced, for the past three months, various instances in which our news boxes in Salem were being vandalized. The acts were happening often enough that I believe we have close to 10 reports with the Salem PD. However, no one really expected the situation to escalate to this level.

“Hatred against our community and any other marginalized community happens everywhere and the progressive city of Salem isn’t an exception. In the current political climate, when a presidential candidate can use inflammatory words and actions—even encouraging violence—towards people of other backgrounds, races, ethnicities, religions, sexual orientations and other identities, then we must prepare ourselves for the inevitable consequences of such violent rhetoric. Most importantly, this is not just an act against The Rainbow Times or the LGBTQ community and its allies, but against the heart of Salem. Anyone could’ve been hurt by this irresponsible and cowardly act and we should all unite as a community to find the perpetrators.

“We, at The Rainbow Times, will not be censored. We will continue our diligent work and we will not be silenced by ignorance or hatred. In the meantime, we will have new boxes at the site of the explosion and will continue to work with the Salem Police Department, the Mayor’s Office and the community as a whole to stand against hatred of any kind. Lastly, we thank the Mayor, the Salem PD Captain Conrad Prosnewski, City Councilors David Eppley and Beth Gerard, Salem No Place for Hate Committee Chair Jeff Cohen, State Representative Paul Tucker and many other community leaders, members, and allies who have joined us in the fight against hatred and discrimination from these 7 individuals who obviously do not know what community is really about and what it means to Salem residents.”