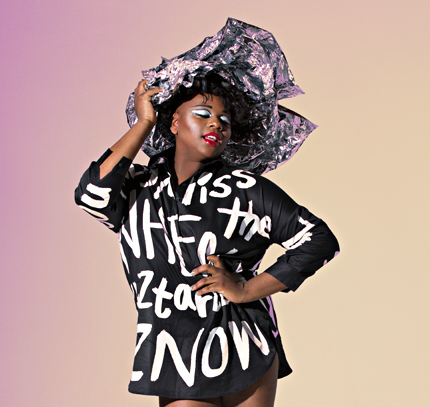 Maybe Alex Newell’s star-making moment – the Dreamgirls showstopper “And I Am Telling You I’m Not Going,” which the 23-year-old gloriously belted out on The Glee Project, before nabbing a spot on Fox’s Glee – was meant to be. After all, as a fiery kid in church choir, Newell was not about to let some lesser singer steal any church-choir solos from him. To get his point across, he would scream “at the top of my lungs.” He would throw things. Until that solo was his, no, Newell was not going.

“If I wanted it bad enough, I would throw a hissy fit until they’d just give me the solo,” he recalls, reliving the early onset of his now-famous ’tude.

With a new EP, Power, to his name, Newell opens up about his reputation as a diva, being mistaken as transgender and – who can blame him? – his meltdown over nearly missing out on singing a Sister Act song.

Chris Azzopardi: Which church solo are you most proud of stealing?

A: What was that stupid song that I wanted… oh my god, yes! It was “Oh Happy Day” from Sister Act. I wanted that solo and they gave it to someone else and I was soooo livid. I was like, “She can’t even sing it! I can sing it so much better than her!” I remember yelling at my aunt in the sanctuary after everybody left and she was like, “You need to calm down,” and I was just like, “NO! I’m not gonna calm down. That solo is mine. I should have it,” and I got it. (Laughs)

Q: So honestly I don’t even know how you’re alive at this moment because I’m assuming you watched Beyoncé during the Pepsi Super Bowl Halftime show.

A: Absolutely! And then I immediately turned the game off.

Q: Of course you wouldn’t miss Beyoncé – she’s one of your all-time favorites.

Q: What is it about her? How does she inspire you as a performer / singer / fashionista?

A: Honestly, she’s so just so… she’s made herself a verb, she’s made herself an adjective, she’s made herself such an entity – a force of nature. She literally almost fell (during the halftime show) and without missing a beat got right back up and didn’t miss a single count – that in itself makes anyone want to look up to her. She stands for so much. She means what she’s singing now, and she’s telling a message and a story.

Q: In your own career, how are you influenced by that?

Q: But you’ve been doing that for years.

Q: Who were your musical influences when you first discovered you were into music – before Beyoncé even existed?

A: Oh my goodness – I mean, was there a before Beyoncé? I’m not that old! Whitney Houston was giant for me because we kind of had the same background of growing up in church and all of that. Chaka Khan, Donna Summer, Aretha. Even gospel artists like Yolanda Adams, Karen Clark and Kirk Franklin. Just like… voices. People who can sing. Patti LaBelle, Mariah Carey. I’ve always gravitated toward voices, whether it be someone screaming in my face, a hard R&B or pop ballad, or even opera and musical theater. I’m always inspired by people who can sing and don’t give any… I won’t say that word….

Q: Feel free to say whatever you want.

A: Like Jennifer Holliday gives zero fucks about her vocal chords and I live for it.

A: Absolutely. I mean, just like melodic riffs and runs that she always did and executed so perfectly. Vocal acrobatics – just that. And the passion behind it, where you’re singing something that you actually believe in as well and you make yourself believe that everyone believes it at the same time. That’s what Whitney was, and I pulled that in there (for the EP). There’s some Donna Summer in there too. Just some of my greats. I tried to emulate them without imitating them.

Q: What do you make of people who refer to you as a diva?

A: Sometimes it’s a compliment. But it doesn’t mean best in their craft anymore. It has this attitude about it, like “I’m a diva because I’m fierce at what I do” not because “I’m the best at what I do.” So, that bothers me a little bit. It doesn’t mean prima donna anymore; it means, “I can wear a leotard on stage and give a subpar show,” rather than, “I can get on the stage and murder everyone”– not murder everyone in the sense of killing them, but murder my performance and be the best at what I do. Be the prima donna, be No. 1, First Lady of the Stage. It’s like calling yourself your race: “I’m black.” OK, great. Good for you. Moving on. It’s just claiming the obvious.

Q: You broke a lot of ground as Unique on Glee, which helped to start a conversation regarding gender and trans issues, both of which are now in the forefront. What does it mean to have been one of the first trans characters on television?

A: It was a great platform and such a great show, but to have a role come into your life that means something – that actually changes the way people view society – it’s just great. Just to know that I was a part of something that’s bigger than me makes it even better. Sometimes you get those roles twice, sometimes once, so I’m just happy I had mine so early in my career.

Q: Do people ever misidentify you as the character in real life?

A: Absolutely, and still to this day. I was at some AIDS benefit and I was walking the carpet and this one man literally looked at me and said, “So, your character is great, but how far along are you in your transition?” I was just like, “Excuse me? No, no, no, no. My character is transitioning. I’m not. I’m just a little black gay boy from Massachusetts.” But that means I’m probably just doing my job that much better. And I’m not angry about it. I’m not bitter about it, that people don’t separate character from real life. It just… it happens.

Q: Did the show have you questioning your own gender at all?

A: Sometimes I’d be like, “Am I (a woman)? No, no, no.” I can’t sit and say that I haven’t, but for a better part of the last three years I was literally playing a woman and sometimes I’d wake up and be like, “I have to put this dress on,” and you go into a routine and I would mentally be preparing myself and waking up mentally prepared as Unique. I was like, “Oh my god, I have to stop this. I have to separate.” But yeah, I’ve done a lot of self-discovery. And I guess I’ve never really seen myself as a woman. Yes, I physically have seen myself as a woman, but when I think about 30 years in the future, I don’t see myself transitioning into a woman. I see myself as a gay male with my husband and my children and living that life. I guess that’s how I’ve confirmed it with myself, which could change. I don’t know. Who knows. I could have another cathartic self-discovery down the line.

Q: When did you know you were gay?

A: I didn’t know what “gay” was; I just knew that I liked boys. Oh my god – I was boy crazed. I still am boy crazed! Like, I can’t… I just can’t… I’ve looked into it (girls) and I can’t. But as a child, if you go to church seven days a week (who you’re attracted to is) probably gonna be one of your friends from church. It was never – because all the boys were ugly and the girls were trying to be prettier than me. (Laughs) It was so much competition. My obsession with boys is how I’ve always known I was gay – and I wasn’t about to get cooties from all the girls.

Q: Have you always been as comfortable in your own skin as you seem to be?

A: Yes and no. There was always this insecurity of not having a father growing up. It’s different just having a single parent. You have an insecurity, because the majority of people around you have both of their parents, so I was a little bit shy for that reason. You’re not socially accepted because you have mommy day and daddy day and your mom shows up for both. So I guess I always was a social outcast, in my own mind rather, and I don’t think I was that confident.

Q: Now look at you. You and Adam Lambert are touring, which has to be the gayest billing of the year.

A: No – it’s gonna be the gayest event of life. Two gays on the road! How fabulous!

Q: Adam was one of your earliest supporters. In 2012, he tweeted you, “Diva I’m blown away by u on Glee! You are KILLIN it Mary!” What’s it like to know that you’ll be touring with him now?

A: To think someone of that caliber – someone who I looked up to – even acknowledged my work when I was just starting, I was floored. Like on the ground, palpitating for air. And to be friendly with him now and to be going on tour with him – that he would even trust me to open for him – is just an amazing feeling and an experience that I will hold with me forever.

Q: What can people expect?

A: Two hours of screaming the entire time and just singing in your face and just great vocals and runs. We might just explode by the end of the night every day.

Q: What about incorporating a Beyoncé cover? Which song of hers would you do?

A: I mean, I’m literally about to sing “Formation” wherever I go now because I just want to say (a la Beyoncé), “If you f$ck me right, I’ll take you to Red Lobster.”

Q: Do you eat at Red Lobster?

A: I’ve never been to Red Lobster a day in my life.

Q: But you’ll eat there now?

A: Unless Beyoncé is there herself, no.

* Chris Azzopardi is the editor of Q Syndicate, the international LGBT wire service. He once made Jane Fonda cry. Reach him via his website at www.chris-azzopardi.com and on Twitter (@chrisazzopardi).