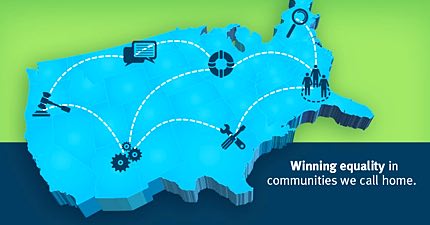 Many lesbian, gay, bisexual, and transgender (LGBT) people (206+ million) and their families live in a state that still needs to update or clarify its laws to include protection from discrimination based on sexual orientation and gender identity.

On January 26th, Equality Federation, alongside 30 statewide lesbian, gay, bisexual, and transgender (LGBT) groups from Georgia Equality to Basic Rights Oregon and beyond, will launch #DiscriminationExists, a week-long education campaign to highlight the fact that despite recent victories for the freedom to marry, many states still need to update their laws to protect LGBT people from discrimination.

Equality Pennsylvania launched the campaign at the Constitution Center in Philadelphia January 27th. Ted Martin, Executive Director of Equality PA, said,  “Pennsylvania is the birthplace of our nation where we proudly stand for freedom. We believe that all of us should have the freedom to live without fear of discrimination. This is an issue of basic fairness.” Martin will be joined by elected officials, business leaders, and local clergy at the official launch of the campaign on Tuesday followed by events around the state in Harrisburg, Scranton, and Pittsburgh.

Equality Federation and Human Rights Campaign recently released the State Equality Index which details the stark reality that millions of Americans are left without protections. The report gives each state a score card based on their level of nondiscrimination protections. (http://hrc.org/sei)

Equality Federation is the strategic partner and movement builder to state-based organizations that are advancing equality in the communities we call home. Learn more at equalityfederation.org.