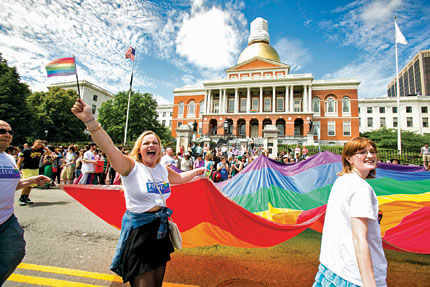 From Rhode Island to Maine, New England Pride season is full of celebrations throughout Massachusetts and other states in the region. Each year, LGBTQ people and allies come together not only in solidarity and support for equality, but also to showcase the diverse and unique facets of their communities.

The first of this year’s events, Northampton (Noho) Pride, will be held May 3. J.M. Sorrell, spokesperson for the event, shared the meaning behind this year’s theme.

“The theme ‘Unity in Diversity’ was chosen for all participants—LGBT people and allies—to recognize and support our multiple identities. When we gather once a year, we open our hearts to each other in empathy to honor our similarities and differences.”

Noho Pride originally began as the “Northampton Lesbian and Gay Liberation March in 1982. Historically held the first Saturday in May, Sorrell said it set a trend for other events throughout the region.

“Northampton has the distinction of being ‘Lesbianville,’ and as such has a higher than usual proportion of lesbians in the LGBT communities in the surrounding areas,” Sorrell said. “Every LGBT pride event in the region, the country and the world is unique and important to all of us.”

For a full schedule or performers and the day’s activities, visit www.nohopride.org.

Boston Pride is the largest of New England’s annual Pride celebrations and one of the largest in the United States. This year will mark the 44th anniversary of the Boston Pride Parade, the second longest running LGBTQ parade next to New York.

“We celebrate the LGBT community, but we are also inclusive of the community at large and embrace the support everyone has given us over the years,” said Sylvain Bruni, Boston Pride’s new president.

With the celebration kicking off June 6 and running through June 15, the theme for Boston Pride 2014 is “Be Yourself, Change the World.”

“The theme encourages the LGBT community to embrace what makes each individual unique and to use those qualities to change the world for the better,” Bruni said.

Bruni shared several differences to this year’s festivities, including that the parade will start an hour earlier than in past years, beginning at 11 a.m. on June 14, due to the ongoing construction at the Government Center MBTA station at City Hall Plaza, where the festival will take place. The construction in the area will reduce entry space into the festival, making it necessary to allow for additional time for participants and spectators to enter. Additionally, Bruni said their entertainment line-up is more diverse than it has ever been, and so far includes Mary Lambert, A Great Big World, Alex Newell, JD Samson and Jeanie Tracy, with more to be announced soon.

Following Boston Pride, North Shore Pride will be celebrated June 21 with an ecumenical interfaith service, followed by a festival with vendors at the Salem Common, a parade, and other events through the day.

Bucci went on to explain that this year’s theme of “How do you show your North Shore Pride?” was chosen in response to feedback that people and organizations were incorrectly referring to the event as Salem Pride. Bucci said she founded North Shore Pride, Inc. in 2012 after several anti-gay hate crimes occurred in the area.

“The primary purpose of the organization is to reach those LGBTQ persons, families and allies throughout the North Shore area who may be struggling or having difficulty and need assistance or want to connect with supports and resources on the North Shore,” said Bucci. “Although the event has been held in Salem, MA to date each year, we wanted to use our theme to bring persons and families from around the North Shore together and to let everyone in the North Shore know this is your event.”

Performer applications are still under review, but will include television and recording artist Alex Newell (also performing at Boston Pride), who is perhaps best known for playing Wade “Unique” Adams on Glee. Newell, who is from the North Shore, will also appear at a VIP reception with fans at the After Party at Murphy’s Pub.

“‘Transformation’ draws attention not only to the struggle for trans inclusivity, but also to the changing nature of our community’s plight,” said Stevens. “Victory is sweet, but we must adapt to the changing times and remember that the struggle continues toward achieving equality and acceptance.”

While the full schedule has not yet been confirmed, the event will include the 38th annual Rhode Island PrideFest and Illuminated Night Parade, as well as other events leading up to these. Performers scheduled to entertain at this year’s event include Comedian Poppy Champlin, Heather Rose in Clover, Aiden James, local bands, comedians and drag queens.

Later in the Pride season, Worcester Pride will be held September 4-6, kicking off with a flag raising and wrapping up with a festival, parade and block party. Joslyn Fox of RuPaul’s Drag Race will be among the entertainers for the event, the theme of which is “Just As I Am.”

“The theme and art work were chosen by Pride supporters, mostly through social media,” said John Trobaugh, Worcester Pride President. “We had hundreds of people suggest, then vote on the winner. We have always used public feedback, but this year the entire process was driven by our supporters”

Trobaugh spoke to what makes Worcester Pride special, including being known as “the Family regional Pride of New England;” having an intense focus on local talent; including many college students and groups; engaging the community; and having a political voice.

“Every year we have had more and more participation from all stripes of local politicians,” said Trobaugh. “We contact them all and let them know our community want to hear from them and we want them to hear from us. In fact, we recently met with the city manager to improve Worcester’s city score on the HRC index. The meeting was a success and the city announced its first LGBT Police liaison. In addition, we have made recommendations for legislation that would allow the city to shine on paper as much as it does in person. We love Worcester and it shows.”

Pride Vermont will hold its festivities September 7-14, with their Pride March and Festival on September 14. Other events will include the Annual High Heel Race, discounted prices at shops and restaurants during Out on Church Street, and the annual Women’s Tea Dance. Randy Violette, Chair of Pride Vermont; Willie Docto, Director of Vermont Gay Tourism Association; and Kim Fountain, Executive Director of RU12? Community Center, explained the theme chosen for this year’s celebration, which will be held in Burlington.

“This year’s theme is Generations of Pride,” the group shared. “The community chose this theme for its dual message to encompass Pride across the decades and pride across the lifespan. We felt that it was a great way to celebrate diversity and to honor our community members of all ages. We also wanted to honor our history as a movement.”

The group also noted that Pride Vermont stands out due to its date in September, which is chosen, among other reasons, based on the weather and to be inclusive of Vermont students. Pride Vermont also stands out due to the Vermont Northern Decadence Food and Travel Expo put on by Vermont Gay Tourism Association, which will showcase LGBT-friendly businesses from across Vermont and include food and wine samples, a silent auction, and the Decadent Cupcake Competition.

“This is a festival within a festival,” said Docto. “Vermont’s is the tastiest Pride festival in the country.”

For the first time, Pride Vermont will also include a Gender Fun Tent to not only celebrate Pride, but also educate the public about the various gender identities in the LGBTQIAA community.

Southern Maine Pride could not be reached for comment.