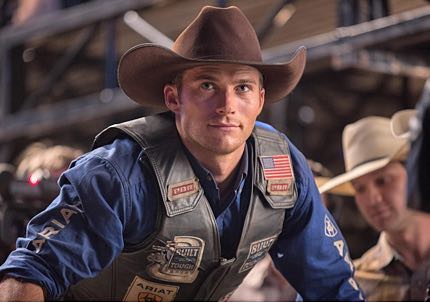 Scott Eastwood has already provided a generous hunk of swoon-worthy shirtlessness, but the model-turned-actor is just getting started. In his first lead role as Luke Collins in the film adaptation of Nicholas Sparks’ The Longest Ride, Clint’s sexy son makes you feel all the feels as a bull rider pursuing a hard-won girl (and, for good measure, flashing his now-famous abs).

During our recent interview, the 29-year-old talked about winning over the gay world as a full-time stud, identifying with his father’s Libertarian beliefs on LGBT equality, his Martin Luther King man crush, and keeping his thoughts (and other stuff) in check during sex scenes. [pullquote]”Fans are fans, and gay men are great. I support gay marriage and the whole bit. I think everybody should be able to be with who they want to be with. My dad is the same way.”[/pullquote]

Chris Azzopardi: Scott, you were obviously blessed with good genes, and people have taken note of that, many of them in the gay community. At this point in your career, how aware are you that gay men enjoy you?

Scott Eastwood: Now I am – you’re bringing it to my attention! I love it. I don’t discriminate against any fans. Fans are fans, and gay men are great. I support gay marriage and the whole bit. I think everybody should be able to be with who they want to be with. My dad is the same way. He’s a total Libertarian – everyone leave everyone alone. Everyone live their own private life. And why does everyone gotta be all up in arms about it?

Q. Your dad put it best when he spoke about gay marriage: “I don’t give a fuck about who wants to get married to anybody else! Why not?!”

A. I’d give the same fucking quote – that’s perfect. I’m a firm believer that everyone’s human. We’re only on this planet for a short period of time, and we should all just be as kind as we can to other people because, in life, all you really have is how you affect people, in a negative way or a positive way.

Q. How did you learn to embrace that mentality?

A. I wasn’t really a model for that long. People say that, but they don’t really know. I mean, I did a couple of modeling jobs, but I never really pursued that. I was like, “Oh well, that’s not really for me. I’m gonna do something different.”

Q. Why wasn’t modeling for you?

A. I didn’t find it creative enough. It was cool, though. It paid some bills when I was in college as a struggling, broke actor.

Q. Your body, however, is breaking barriers. I read a web comment recently that said, “Even I, as a Gold Star lesbian, look at this guy and state categorically, ‘A-hummina-hummina-hummina.’” What’s it like to know you can have that effect on even the lesbian community?

A. (Laughs) That’s awesome! I mean, I don’t really know what I’ve done that’s worthy of it.

Q. You’ve taken your shirt off a few times, so there’s that.

Q. The hat, the Levis, the boots. You rock that look like you were born a cowboy.

A. There’s probably a little bit of cowboy in me somewhere.

Q. When it comes to gay roles, could you see yourself playing one? Is it too soon to get you in a Brokeback Mountain remake?

A. Oh my gosh – that’s funny! (Laughs) To me, it’s all about the script and the director. I’m very director-driven and material-oriented, so if it’s a great script and a great director, then yeah.

Q. What do you look for in a great script and a great director?

A. Ohh. That’s hard to put into effect. It’s gotta have that je ne sais quoi, as they say. You don’t know why it’s amazing but it is.

Q. What about this Nicholas Sparks movie stuck out to you when you read the script?

A. Well, for one, I love (director) George Tillman, Jr. – his films are great. I loved Men of Honor. I thought it was a fantastic movie. I thought that movie was an old ’90s drama, which don’t exist anymore. I was really so excited to work with him. I thought it was a very unorthodox choice to have him direct a Nicholas Sparks movie. And then geez – what else? The script was great.

A. That would be amazing. That’d be so funny if that happened. And why not?!

Q. Your sex scene in this movie wasn’t your first.

Q. What’s the trick to shooting a sexy sex scene?

A. Keeping your thoughts sort of… controlled.

Q. In addition to keeping other things “controlled.”

Q. In The Longest Ride or during every sex scene you’ve done?

A. (Laughs) Some more than others.

Q. You’ve shown full butt before, and in The Longest Ride, you graciously give us a glimpse. With this movie, how was it determined how much butt would be in the shot?

A. (Laughs) For me, I didn’t really care. The butt thing – to me, this was a really classy story and a really classy movie, so I didn’t care about showing a little butt in there. That’s part of it. Sex scenes – you see a little bit of action, right? And that’s what makes a good sex scene. Not too much. You don’t wanna give it all away. You gotta leave something to the imagination.

Q. Has your father seen the movie?

Q. How do you feel about him seeing those scenes?

Q. When you’re in a movie about love and relationships and sex, people are interested in your own personal experiences.

Q. How do you deal with those kinds of questions? Are you an open book?

A. Partially. I don’t give everything away. You gotta have your private life too. But I’m not shy. I love women.

Q. On Twitter recently you said your man crush is your dad. Who are some of your other man crushes?

A. People who have the balls to change the world. Guys like Martin Luther King, who said things at a time when they weren’t acceptable. People who are out doing great things. Guys like Enric Sala who are saving the world. The Pristine Seas project. People who are working toward curing cancer, or working with kids – that’s really great stuff to me.

Q. What are or have been some of the challenges of creating a career independent of your father?

A. That people take me seriously. I’ve been doing it for 12 years, and I always say Hollywood is like high school. If you’re not the cool kid, you’re the outcast. And nobody really cares and people don’t take you seriously. I was never the cool kid. Definitely not the cool kid. And so I split. I split LA. I lived in San Diego. And there’s been a couple of moments I thought about throwing in the towel, for sure. I once heard from Mel Gibson. His advice was, “Just stick around and keep plugging away at it. Keep your head down and keep working hard.”

Q. With so much attention on your shirtlessness, is there more pressure to prove yourself beyond the hunky exterior?

A. I don’t really think about it like that. I don’t spend a lot of time on it. There’d be a lot of wasted time if I let that consume my thoughts. I just keep my head down and do the best I can.