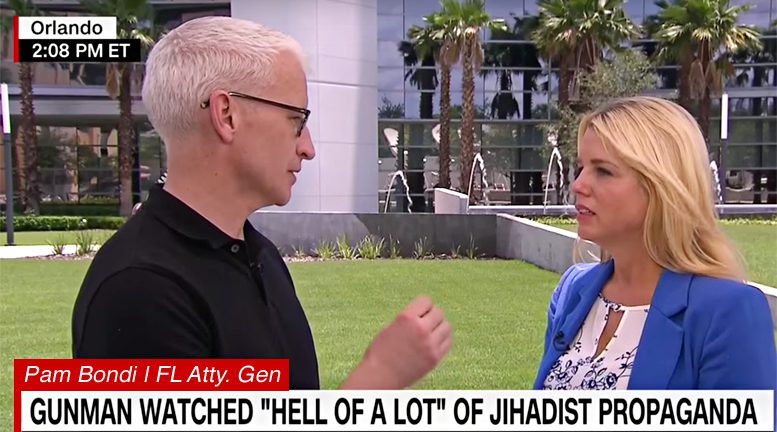 The CNN anchor on how AG Pam Bondi’s action have been part of the problem, not the solution. Watch the video below.

Cooper: “I Will Say I Have Never Really Seen You Talk About Gays And Lesbians And Transgender People In A Positive Way Until Now” From the June 14 edition of CNN’s CNN Newsroom with Brooke Baldwin

Transcript of the video information:

ANDERSON COOPER: I want to ask you, I saw you the other day saying that anyone who attacks the LGBT community, our LGBT community, you said, will be gone after with the full extent of the law.

COOPER: I talked to a lot of gay and lesbian people here yesterday who are not fans of yours and who said that they thought you were being a hypocrite, that you for years have fought — you basically gone after gay people, said that in court that gay people simply by fighting for marriage equality were trying to do harm to the people of Florida. To induce public harm, I believe was the term you used in court. Do you really think you’re a champion of the gay community?

COOPER: But do you worry about using language accusing gay people of trying to do harm to the people of Florida when doesn’t that send a message to some people who might have bad ideas in mind?

BONDI: Anderson, I don’t believe gay people could do harm to the state of Florida. We’re human beings.

COOPER: But you argued that in court.

BONDI: My lawyer argued a case defending what the Supreme Court allowed the voters to put in our state constitution.

COOPER: Are you saying you did not believe it would do harm to Florida?

BONDI: Of course not, of course not. Gay people—no, I’ve never said that. Those words have never came out of my mouth.

COOPER: But that is specifically what you were arguing in court.

COOPER: The hotline that you’ve been talking about on television which allows family members and spouses of the dead to get information, which is incredibly important, and I appreciate you talking about it on the air, had there been no gay marriage, had there been no same-sex marriage, you do realize that spouses, there would be no spouses, that boyfriends and girlfriends of the dead would not be able to get information and would not be able probably even to visit in the hospital here. Isn’t there a sick irony in that?

BONDI: Let me take it a step farther. People aren’t right now who are partners and aren’t married officially aren’t able to get information, so we’re trying to assist them in getting information. Because early on we only have 24 people —

COOPER: Isn’t there a sick irony that you for years were fighting that very idea?

COOPER: But the courts, the federal courts said that’s not the constitution and you continued to fight it.

BONDI: No. That’s why we rushed it to get it to the U.S. Supreme court because we needed finality.

COOPER: Well, before the Supreme Court, there was a federal judge and you continued to fight it after the federal judge ruled, and in fact you spent hundreds of thousands of dollars of taxpayer money fighting it.

BONDI: Well Anderson, we rushed to get it to the Supreme Court. You know what today is about? Human beings. Today’s about victims.

COOPER: It is about gay and lesbian victims.

BONDI: It sure is. LGBT victims. It’s about Florida —

COOPER: I’m just wondering is it hypocritical to portray yourself as a champion of the gay community when—I’m just reflecting what a lot of gay people have told me, they don’t see you as that.

BONDI: Anderson, I’m not portraying myself as anything other than trying to help human beings who have lost their lives, who are right behind us right now in hospital beds, who have family members who aren’t getting the services they need. This morning, you know what I’ve been doing? Trying to fight with a funeral home for overcharging family members.

BONDI: To bury their loved ones. I’m not championing anything other than Floridians. That’s what this is about. We’re about human beings.

COOPER: It’s just that—I will say I have never really seen you talk about gays and lesbians and transgender people in a positive way until now. I read your Twitter history for the last year, and I saw you tweeting about, you know, national dog month and national shelter dog appreciation day or adopt a shelter dog month. It is gay pride month. You’ve never even tweeted about gay pride month.

BONDI: Well actually if you look at my website now, we have hands clasped together, all different colored rainbow hands, people.

COOPER: So you just put that up now.

BONDI: Yeah I did, after this horrible tragedy, absolutely. The only thing I’m championing are human beings whose lives were lost to terror.

COOPER: So that’s your message to gay and lesbian people here. Because again, I’m telling you what people have been telling me to ask you, moving forward, do you see yourself as being a vocal champion for gay and lesbian citizens in this state?

BONDI: They are citizens just like anyone else. Of course. My goodness, Anderson, we’ve had 49 people murdered. Simply because they were in a bar at the wrong time.

COOPER: I know a lot of gay and lesbian people in the state want to feel that the people that represent them, represent everybody in the state.

BONDI: We’re human beings and that’s what this is about.