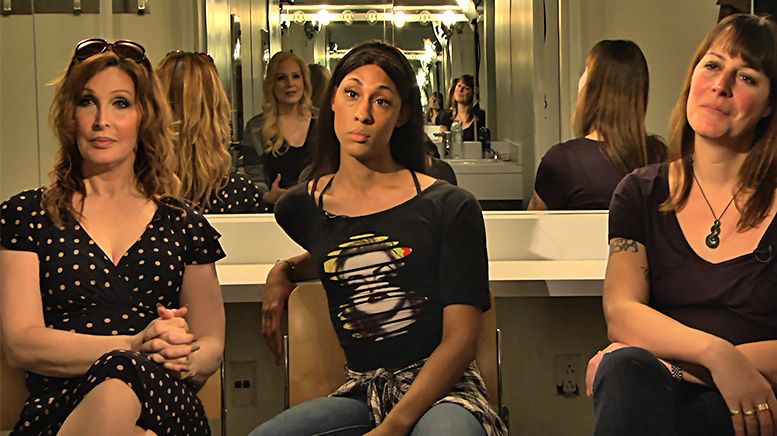 Ticket prices from $25 Now on sale by phone at 617.547.8300, in person at the Loeb Drama Center Ticket Services at 64 Brattle Street, or online at AmericanRepertoryTheater.org

Trans Scripts, Part I: The Women is a new play drawn from candid interviews with dozens of transgender women around the world. The play uses their actual words to shed light on the rich and diverse experiences within the transgender community. Jo Bonney (Father Comes Home From The Wars (Parts 1, 2 & 3)) directs a cast of seven in the U.S. premiere of this frank, moving, humorous, and timely work that received a Fringe First Award for new writing and a High Commendation from Amnesty International at the 2015 Edinburgh Festival Fringe.

In producing Trans Scripts and the accompanying I.D. Festival to be held at OBERON during the run of the production, the American Repertory Theater seeks to share a broad range of trans voices and experiences. These works aim to celebrate stories both real and fictionalized that reflect this diversity, rather than subscribing to, or reinforcing the notion of a single “trans narrative.”

Patrons buying a ticket for TransScripts as well as production from the I.D. Festival will receive a discount on both tickets purchased.

For more information about the ID Festival visit AmericanRepertoryTheater/id-festival

Matthew Hancock (Zakia)’s recent credits include Frederick Douglass/Kid 1 in Greg Kalleres’s Honky (Rogue Machine Theatre), Carson in Ike Holter’s Hit The Wall (Los Angeles LBGT Center), Anthony in Lauren Gunderson’s I and You (Fountain Theatre), Oshoosi in Tarell Alvin McCraney’s The Brothers Size (The Fountain Theatre), and Young number two in Marcus Gardley’s The Road Weeps the Well Runs Dry (Los Angeles Theatre Center).  Matthew will be recurring on “I’m Dying Up Here” for Showtime, executive produced by Jim Carrey.  He has appeared on HBO’s “Insecure” directed by Debbie Allen, as William on “All My Children” (opposite Debbie Morgan), and can be seen in the indie short Martyr (California Women’s Film Festival Best Actor Nominee).  He holds a BFA from Adelphi University and is a graduate of the New York Conservatory of the Dramatic Arts, School of Film and Television.  Matthew is a Los Angeles Drama Critics Circle Award winner, LA Stage Raw winner, LA Stage Alliance Ovation nominee, Broadway World Los Angeles nominee, and NAACP Theatre Award nominee. When not appearing on the stage or screen Matthew enjoys musical endeavors as his alter ego Michael Siren.

Eden Lane (Sandra) This production at A.R.T. marks Eden Lane’s return to the theater. During her absence she became a homemaker, stay at home mother, and built a successful career in television journalism. Her award winning work as host/producer/reporter focuses on community affairs, politics, and the arts. She has been featured on PBS affiliates, CNN Tonight, ET, Huffington Post, and other outlets. As America’s first transgender television reporter, Eden Lane is a trailblazer.

Bianca Leigh (Tatiana) is an actress, singer, writer and educator. A graduate of Rutgers University Mason Gross School of the Arts, Miss Leigh’s acting roles include Mary Ellen in the groundbreaking film Transamerica, Time/Wind in Taylor Mac’s theater epic The Lily’s Revenge, Franny Halcyon in the New York and San Francisco workshops of the musical Tales of the City, Tatiana in Trans Scripts at the 2015 Edinburgh Festival Fringe, Dr. Rachel Sandow on “Law & Order: SVU,” and Karma in the feature film Hurricane Bianca. Bianca wrote and performed her acclaimed solo musical BUSTED at the Laurie Beechman Theatre in 2012. Miss Leigh was profiled this year in Cranes New York for her work with students at NYU Medical School, and was the commencement speaker at Rutgers University’s Lavender Graduation in 2014. She recently participated, alongside MJ Rodriguez, in the Samuel French panel discussion “On Stage and Off: The State of Transgender Artists.”

Mj Rodriguez (Luna) has been pursuing a theater career ever since age 11. She has performed the role of Angel in the Off-Broadway revival of Rent, and appeared in Dreamgirls, The Pajama Game, and Once On This Island. Mj has also made TV guest star appearances on “Nurse Jackie,” The Carrie Dairies” on The CW Network, Netflix Original Series “Luke Cage,” as well as the feature film Saturday Church!

Rebecca Root (Eden) is best known for playing Judy in BBC Two’s groundbreaking comedy series “Boy Meets Girl.” The second series was broadcast in summer 2016. Other screen credits include The Danish Girl, Hank Zipzer, Hollyoaks, Casualty, Midsummer Murders, and Keeping Up Appearances. She appeared in the award-winning production of Trans Scripts at the 2015 Edinburgh Festival Fringe and starred in the play 1977 for Radio 4. At the end of 2015 she was a guest on “Celebrity Mastermind,” winning the contest with the specialist subject ‘the novels of Graham Greene.’ Rebecca is also a respected voice coach, gaining her MA in Voice Studies from the Royal Central School of Speech and Drama. Rebecca is patron of the charities All About Trans and Diversity Role Models and is a passionate advocate for LGBT visibility, equal rights and societal acceptance.

Jack Wetherall (Dr. Violet) was a leading member of the Stratford Festival Theatre company for a number of years, including performances in the title role of Henry V, Orlando in As You Like It, and Konstantin in The Seagull, the latter two opposite Dame Maggie Smith. He performed the title role of The Elephant Man on Broadway; Off Broadway and regional credits include Henry VI (Warwick) at Theatre for a New Audience; The Tempest (Prospero) at North Carolina Shakespeare Festival; Measure for Measure (Escalus) at Shakespeare Theatre of D.C.; The Last Days of Mickey and Jean (Mickey) and Tunney/Shakespeare in Six Rounds (Gene Tunney) at Merrimack Repertory Theatre; Gross Indecency: The Three Trials of Oscar Wilde (Oscar Wilde) at Cincinnati Playhouse; Heartbreak House (Shotover) at the Goodman Theatre; Cyrano de Bergerac (title role) at The Guthrie Theater; Pericles (title role) at Hartford Stage; Twelfth Night (Orsino) and The Rivals (Jack Absolute) at The Old Globe; Romeo and Juliet (Mercutio) at Long Wharf Theatre; Macbeth (title role) and Love’s Labour’s Lost (Berowne)at Alabama Shakespeare Festival; Richard II (title role)at Utah Shakespearean Festival; The Greeks (Orestes) at Williamstown Theatre Festival; The Cherry Orchard (Lopakhin)at ACT; and Les Liaisons Dangereuses (Valmont) at Pittsburgh Public Theater. He appeared on film and television in Third Man Out and “Queer as Folk” (four seasons as Vic).

The American Repertory Theater (A.R.T.) at Harvard University is a leading force in the American theater, producing groundbreaking work in Cambridge and beyond. The A.R.T. was founded in 1980 by Robert Brustein, who served as Artistic Director until 2002, when he was succeeded by Robert Woodruff. Diane Paulus began her tenure as Artistic Director in 2008. Under the leadership of Paulus and Executive Director Diane Quinn, the A.R.T. seeks to expand the boundaries of theater by programming events that immerse audiences in transformative theatrical experiences.

Throughout its history, the A.R.T. has been honored with many distinguished awards, including the Tony Award for Best New Play for All the Way (2014); consecutive Tony Awards for Best Revival of a Musical for Pippin (2013) and The Gershwins’ Porgy and Bess (2012), both of which Paulus directed; a Pulitzer Prize; a Jujamcyn Prize for outstanding contribution to the development of creative talent; the Tony Award for Best Regional Theater; and numerous Elliot Norton and IRNE Awards.

The A.R.T. collaborates with artists around the world to develop and create work in new ways. It is currently engaged in a number of multi-year projects, including a new collaboration with Harvard’s Center for the Environment that will result in the development of new work over several years. Under Paulus’s leadership, the A.R.T.’s club theater, OBERON, has been an incubator for local and emerging artists and has attracted national attention for its innovative programming and business models.

As the professional theater on the campus of Harvard University, the A.R.T. catalyzes discourse, interdisciplinary collaboration, and creative exchange among a wide range of academic departments, institutions, students, and faculty members, acting as a conduit between its community of artists and the university. A.R.T. plays a central role in Harvard’s newly launched undergraduate Theater, Dance, and Media concentration, teaching courses in directing, dramatic literature, acting, voice, design, and dramaturgy. The A.R.T. Institute for Advanced Theater Training, run in partnership with the Moscow Art Theatre School and the Harvard Extension School, offers graduate training in acting, dramaturgy, and voice.

Dedicated to making great theater accessible, the A.R.T. actively engages more than 5,000 community members and local students annually in project-based partnerships, workshops, conversations with artists, and other enrichment activities both at the theater and across the Greater Boston area.

Through all of these initiatives, the A.R.T. is dedicated to producing world-class performances in which the audience is central to the theatrical experience.

One Woman’s Thoughts on What it’s Like Being Transgender