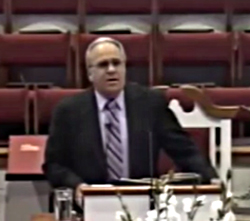 It should be a surprise to no sentient being that by coming out in favor of marriage equality; President Obama opened the floodgates for the anti-gay crazies. Mind you, this is not his fault, nor is it really a bad thing. I mean, it’s not like these people haven’t always been out there hating gays. But when the tide starts turning toward equality and justice, those against such a turn are going to fight that tide every inch of the way.

This is, perhaps, especially true in North Carolina since they just passed their whole “gays marrying is horrible” amendment.

Enter Charles L. Worley, pastor at Providence Road Baptist Church in Maiden, North Carolina. I would say that Obama’s marriage equality announcement inspired Worley’s May 13 sermon, but “inspired” is just not the right word to use for such a hate-filled rant.

Got that? The Bible, God, and Worley all agree. Which means you must agree, otherwise you’re an idiot. The problem is, of course, that the Bible doesn’t say anything about marriage equality, and I have a hunch Worley doesn’t have a direct line to God. Because if he did, God would change His number and unfriend Worley on Facebook. Why? Because of what he says next.

“I figured a way to get rid of all the lesbians and queers,” Worley says in his sermon, delivered on Mother’s Day for Christ’s sake. “But it couldn’t get past the congress. Build a great, big, large fence — 150 or 100 mile long — put all the lesbians in there, fly over and drop some food. Do the same thing for the queers and the homosexuals and have that fence electrified so they can’t get out. Feed ’em, and you know what, in a few years, they’ll die out. Do you know why? They can’t reproduce.” [Watch Worley’s http://www.youtube.com/watch?v=w2839yEazcs]

Oh, wow. This plan is such a great combination of various human rights abuses. It’s hard to know where to even begin, although I suspect that someone’s been brushing up on his WWII history and cruising the Minuteman website.

First of all, where would these big fenced areas be built? And would there be two separate areas, one for lesbians and another for queers and homosexuals? I’m assuming yes since you want to stop reproduction. Also, what is the difference between queers and homosexuals for the sake of this argument? You indicate that the areas would be in the neighborhood of 100-150 miles long, but how wide (it seems like a really critical detail. Six feet like a jail cell or a grave maybe)? When you say, “drop some food” do you mean, like, once, or on a continual basis? And, really, why bother with food at all if your intention is to “get rid” of them? Heck, why bother with this plan at all if you want them all dead? There are quicker ways to kill people. But maybe in your mind your plan allows the whole thing to be put in God’s hands thus making it all very Christian nice-nice.

A bigger question is that once this plan is completed, what do you propose be done with all of the straight people who keep giving birth to gay people?