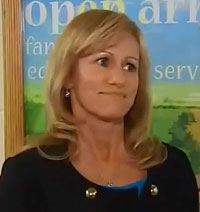 Not every teacher is able to find the courage to boldly declare that gay, lesbian, and bisexual students have no purpose in life and that their very existence is offensive to her.

But Sullivan High School special education teacher Diana Medley is an exception. Especially if by “courage” we mean ignorance and bigotry, or, as the combination of the two is more commonly called, “dumbf$#@ery.”

Now, as I am sure you can imagine, the gays started it. All Medley and a few like-minded folks wanted was a homo-free prom but Sullivan High School wouldn’t give it to them, metaphorically punching Jesus in the face by allowing same-sex couples not only to attend prom, but to participate in the Grand March, which I guess is some kind of prom parade or whatever but it doesn’t even matter what it is because obviously gays shouldn’t be allowed in it because GOD.

“We don’t agree with it and it’s offensive to us,” Medley told a local TV news reporter.

By “it” I’m pretty sure she’s talking about homosexuality and since she and her cohort are all offended, they decided to make their own little prom in a church basement or something and make it very clear: NO HOMOS ALLOWED.

Besides being offended that people who are different than her exist, Medley has some very specific thoughts about gays and lesbians.

“I believe it was a choice that she made,” she told NBC 2 (who “she” is here is not clear, though it could be any lesbian. I think it’s pretty safe to say that they’re all the same to Medley). “I don’t believe that they were born that way. I think that life circumstances made them choose that. I think that God made everybody equal.”

Let’s unpack that. Gay people were not born gay, they just choose to be gay to compensate for their terrible lives. And God made everybody equal. Except that Medley obviously is not interested in treating gay, lesbian, and bisexual students as equal to heterosexual students. So by “equal” I think she means “straight.” Which means that the queers have gone and “unequaled” themselves, making this whole thing their own damn fault.

And to think that Medley gets paid real taxpayer dollars to “educate” openly gay students.

“I have kids come to be because of their sexual preference, and they know I don’t agree with it, but I care about you,” she said.

For the record, I would advise students not to go to Medley about your “sexual preference” because, for one, she doesn’t seem to know that’s not the same thing as sexual orientation. Though I doubt she cares. Secondly, someone who thinks you’re too icky to go to prom doesn’t care about you.

If LGBT students need further proof of Medley’s “caring,” check out what she says when the newscaster then asks if she thinks that gays have a purpose in life.

“I don’t. I personally don’t. I’m sorry. I just, I don’t understand it. A gay student or adult or person isn’t going to come up and make some change unless it’s because they realize you know what, it was a choice and I’m choosing God,” said Medley.

Granted it’s not the most articulate answer, and I think the words “I don’t understand it” speak volumes, but the meaning is pretty clear. The only purpose Medley thinks homos have is to de-gay themselves in the name of God.

Oh, and also to ruin prom for the kids who matter. [To view Medley’s comments, check out her statements via shockingtv’s YouTube channel].