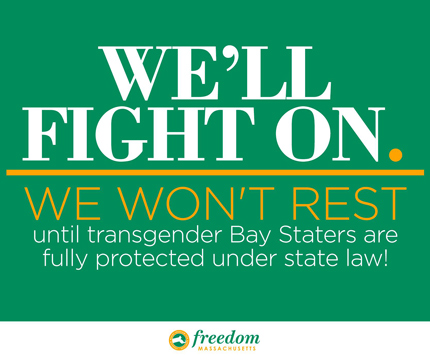 Development will be updated with more reactions from Bay Staters

BOSTON, Mass—Massachusetts legislators left for the holiday recess without bringing to a vote the Transgender Rights Bill, which would fully protect transgender citizens of the Commonwealth from discrimination.

“While it is disappointing transgender young people and adults in our state will have to wait longer to see legislation enacted that fully protects them from discrimination, our fight is not over. The discrimination is real, the harassment is pervasive, and the need for a clear statement of prohibition by our government is urgent. Our momentum is building and our voices are being heard. The stakes are too high and we are so close, so we will continue our relentless pursuit of equal protections for all residents of Massachusetts until the end of this legislative session. Our broad coalition is in this until we succeed. We will not rest until our transgender friends and neighbors are protected from discrimination and violence.”

Other supporters of An Act Relative to Transgender Anti-Discrimination (SB 735 and HB 1577) also shared Suffredini and Dunn’s feelings.

“We are enormously disappointed that the Legislature is passing on this opportunity to protect all of our citizens from discrimination,” said Janson Wu, Executive Director of Gay & Lesbian Advocates & Defenders (GLAD), via a GLAD press release. “For transgender people to live another day experiencing and fearing discrimination in a state that prides itself on its civil rights leadership is distressing.”

This is not, all agree, the end for transgender rights in the state.

“GLAD has been proud to be part of the Freedom Massachusetts Coalition that brought the bill this far,” Wu added. “We have gained a lot of ground, we have educated a lot of people, and we have built tremendous support, particularly from the business community and from law enforcement.  I’m confident that we will attain these protections—it’s a question not of if but when.” [pullquote]”The bill is pending before the Joint Committee, the House chair made clear in public statements that he was not ready to move the bill out of committee,” said MA Senate President, Stan Rosenberg, via a live Q&A today. “There is strong support in the Senate and the Senate stands ready to vote on the matter, as soon as we have access to the bill.”[/pullquote]

The new law would have required equal treatment for transgender and gender non-conforming patrons. It would have also required that businesses not refuse service to transgender customers.

“The bill is pending before the Joint Committee, the House chair made clear in public statements that he was not ready to move the bill out of committee,” said MA Senate President, Stan Rosenberg, via a live Q&A today. “There is strong support in the Senate and the Senate stands ready to vote on the matter, as soon as we have access to the bill.”

The legislature, according to GLAD’s release, will reconvene in January, when it will have an opportunity again to take up the bill.

The Freedom Massachusetts Coalition has gained the tremendous support of more than 170 businesses and organizations – both small and large, major chambers of commerce, the state’s law enforcement associations and leaders, schools, municipal leaders, and the entire congressional delegation. Just yesterday House Speaker Robert DeLeo publicly pledged his support for the effort. Senate President Stan Rosenberg is also in support of the legislation.

Rosenberg will have a live questions session today at noon, via his FB page, seeking questions and providing answers to Bay Staters about issues that matter to them.

Lawmakers will not vote on #TransBillMA before breaking today. But we fight on & will push for a swift 2016 vote. pic.twitter.com/t2tB4t4fi4

With #transgenderequality bill not being taken up by #maleg this year, Q is will it happen in an election year? Maddening #mapoli

170+ businesses, 14 cities, law enforcement, major colleges all agree: We need #TransBillMA! We won't stop working until we pass it. #MAPoli