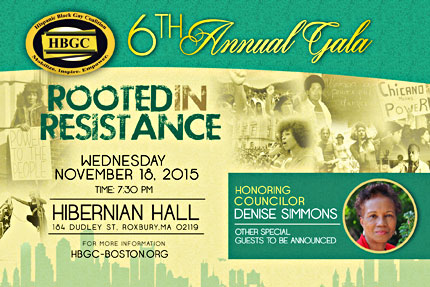 BOSTON, Mass.—The Hispanic Black Gay Coalition (HBGC) will host its annual gala and soiree on Wednesday, November 18, from 7:30 p.m. to 12:30 a.m. The event will be held at the historic Hibernian Hall, located at 184 Dudley Street, Boston, MA, 02119. The community-oriented celebration, titled Rooted in Resistance, will mark six years for the organization, which started as a grassroots response to the lack of visibility, resources, and services for Black, Hispanic, and Latin@ LGBTQ individuals in the Greater Boston area.

Highlights for the evening will include a pre-event reception with special guests, an award ceremony honoring individuals working to empower LGBTQ communities of color, a silent auction, testimonials from HBGC program participants, and a dance party with DJ BEGBICK. [pullquote]HBGC also used the year to strengthen partnerships to respond to social disparities that adversely impact Black and Latin@ LGBTQ people.[/pullquote]

In 2015, HBGC continued its staple programs and services while hosting a number of community events to mobilize and empower Black and Latin@ LGBTQ communities. The organization recently celebrated its 5th Annual Youth Empowerment Conference by hosting more than 100 LGBTQ youth of color at Roxbury Community College for a weekend of skill sharing, leadership development, and community organizing. Earlier this year, in collaboration with The Aging Project, HBGC engaged LGBTQ youth and elders of color for an intergenerational film screening and discussion of the Oscar-nominated film Selma. The organization also provided a unique space for non-normative forms of love and relationship styles at its Colors of Love Summit in April. The summit, organized by HBGC’s New Leaders Institute, raised awareness to identifies often overlooked by the mainstream LGBTQ community, such as asexuality, bisexuality, polyamory, and pansexuality.

HBGC also used the year to strengthen partnerships to respond to social disparities that adversely impact Black and Latin@ LGBTQ people. These efforts include providing ongoing technical assistance and leadership development opportunities to seven Gay-Straight Alliances in predominately Black and Latino schools, collaborating with Mass Mentoring to host another cycle of HBGC’s LGBTQ mentorship program, co-hosting a bilingual program for LGBTQ survivors of violence, and launching a healthy relationship public awareness campaign with the TOD@S Collaborative. [pullquote]The community-oriented celebration, titled Rooted in Resistance, will mark six years for the organization, which started as a grassroots response to the lack of visibility, resources, and services for Black, Hispanic, and Latin@ LGBTQ individuals in the Greater Boston area. [/pullquote]

As in past years, the gala and soiree will not only be used to reflect on the important work of HBGC, but the event will also honor others who have made an impact in LGBTQ communities of color. Receiving the James Earl Hardy Legends Award will be Cambridge City Councilor Denise Simmons. The award recognizes a trendsetting activist who has impacted LGBTQ communities of color for more than 10 years.  Simmons is currently seeking reelection to an eighth term on the Cambridge City Council.

HBGC’s Audre Lorde Founder’s Award, dedicated to an up-and-coming activist who has taken initiative to create change in LGBTQ communities of color, will be presented to Darnell L. Moore. Moore is a Senior Editor at MicNews and Co-Managing/Editor at The Feminist Wire. Moore’s advocacy centers on marginal identity, youth development, and other social justice issues in the U.S. and abroad. He is currently a co-organizer of Black Lives Matter and has led and participated in several critical dialogues, such as the 58th Session of the UN Commission on the Status of Women, and was a member of the first U.S. delegation of LGBTQ leaders to Palestine in 2012. [pullquote]The final award, the Sylvia Rivera Community Award, will honor a local organization, program, or business that has worked to empower LGBTQ communities of color within or beyond Black and Latin@ communities.[/pullquote]

The final award, the Sylvia Rivera Community Award, will honor a local organization, program, or business that has worked to empower LGBTQ communities of color within or beyond Black and Latin@ communities. The winner, selected by community vote, will be announced at the event. The 2015 nominees will be announced on the event website, rootedinresistance.eventbrite.com, on October 1, 2015.

HBGC hopes the event will be an opportunity to further build community and raise the critical funds needed to sustain and expand the organization’s programming for another year. General advance tickets are $50, and student tickets are available for $25. Tickets can be purchased at the Sustainer level of $100 to attend an open bar reception with guest honorees and HBGC’s Board of Directors. There are discount opportunities when buying a pair of tickets; attendees can save $15 when purchasing a pair of General tickets and $25 on a pair of Sustainer tickets. There is also an option to purchase tickets for a table of 8 at both General and Sustainer levels. For more information and to purchase tickets, visit rootedinresistance.eventbrite.com.

Hispanic Black Gay Coalition (HBGC) is one of few non-profit organizations in Boston dedicated to the unique and complex needs of the Black, Hispanic and Latin@ LGBTQ community. Founded in 2009, we work to inspire and empower Latin@, Hispanic and Black LGBTQ identified individuals to improve their livelihood through activism, education, community outreach, and counseling.