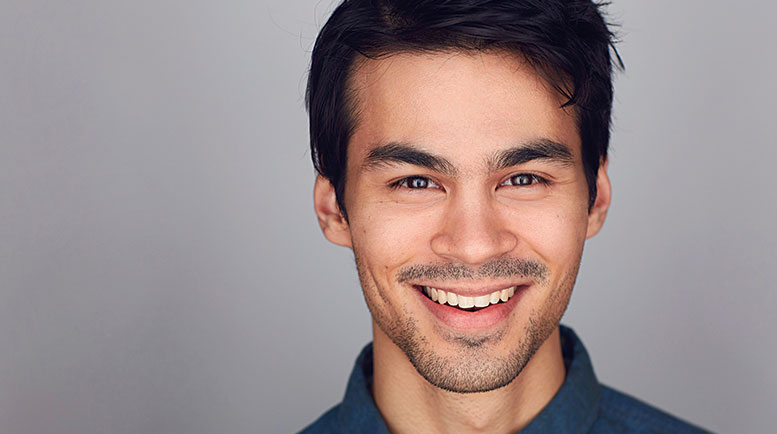 By: Phil Bessimer/Special to TRT—

JJ Bozeman grew up in Augusta, GA, the son of a U.S. Navy Dad and an immigrant mother.

He first moved to NYC in his junior year in high school but left a year after graduation to pursue a relationship in Wilmington, North Carolina. When it ended, he returned north to pursue an acting career, moving into a Bronx apartment with a female model he had never met. It was a total leap of faith and desperation, but it worked out, and he still lives with her, except now they call Brooklyn home.

Life as a young, gay, Filipino actor in New York has been challenging, but Bozeman has found success on stage, starring in in Haleh Roshan’s FREE FREE FREE FREE and in readings of plays by Filipinx playwrights Megan Tabaque and Alton Alburo. In August, he made the jump to movies, starring in Jack Tracy’s acclaimed LGBTQ political thriller, Snowflake, a fictional story that depicts the fear of a nation when a Trump-like politician is suddenly thrust into the White House.

At the center is Bozeman’s character Ethan, whose increasing panic of the new administration drives the film. When happenstance puts Ethan in the same room as the Vice President, he is forced to choose the best way to protect his friends and the LGBTQ community.

Snowflake began streaming on Vimeo last month. We spoke with JJ Bozeman from his Brooklyn home.

Q: Hi JJ, pleasure to speak with you!  How are you coping through the pandemic?
JJ Bozeman: I’m taking it day-by-day in this bizarre time we live in. A lot of my focus has been on supporting Black Lives Matter and staying healthy.

Q: With theatres closed, are you keeping yourself busy?
A: I’ve been teaching myself editing, lighting, and sound, working on a project I shot with friends right before the quarantine.

Q: Is Snowflake your first lead role in a film?
A: Yes, it is!

Q: How did you land the role of Ethan?
A: I auditioned to be in Jack Tracy‘s web series,  History, back in 2017. I didn’t get the part, but he kept me in mind for other roles. He also offered me the opportunity to work behind the scenes, and I jumped at it to learn about being on that side of the camera. It gave us time to get to know each other and he says he wrote the part of Ethan with me in mind.

Q: Could you relate with Ethan and the paranoia he feels after his worst nightmare is elected President?
A: Absolutely. The election in 2016 really horrified me and so working on a project that directly confronts those fears was both cathartic and taxing, because it felt close to home. There was safety in making a movie because it is pretend, but the story comes from current events, and that’s not pretend.

Q: Of everyone in Ethan’s circle (Ryan, Paul, Owen…), who do you identify with most?
A: I’m becoming Paul, the older character, who was an ACT UP activist. The current political climate and battle against racism is shaping me as a person.

Q: Without giving anything away, what are your thoughts on Ethan and how he handles his panic?
A: Ethan is emotional and intellectual. In moments that feel so uncertain, you don’t know if your fear or your rational mind are going to drive the ship. I think Ethan is deeply human in his struggle. I have sympathy for how he handles things, because he’s in such an intense position.

Q: Why should everyone see Snowflake before November?
A: Because we have a demagogue as president. He discredits any journalist that isn’t applauding him. He doesn’t believe in science. He doesn’t care about the working class. There are still children in cages.  Millions of people have lost healthcare in the middle of a pandemic. I don’t think I’ve even covered the tip of the iceberg. Every week we have something new to worry about.  Not all of these issues are explored in “Snowflake”, but the film is a reminder of how important elections are for everyone in our country. Get ready to vote, people!

Snowflake is available at https://vimeo.com/ondemand/snowflakefilm.