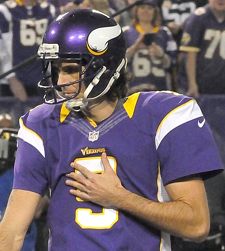 When Chris Kluwe began working for same-sex marriage in Minnesota – and then wrote a powerful letter in support of the same issue in Maryland – the reason was simple: It was the right thing to do.

What made his voice particularly important is that he was a professional football player. And although not many athletes are outspoken on issues like LGBT rights, Kluwe found surprising support among his teammates. The stereotype of pro athletes as conservative, insensitive brutes unconcerned with social issues is wrong, the former Minnesota Viking kicker claims.

“Athletes are role models. We have an obligation to speak out,” Kluwe told The OutField recently. He admits that although it has been “unusual lately” for athletes to talk about social issues, that was not always the case. Tommie Smith and John Carlos gave Black Power salutes at a 1968 Olympic medal ceremony. Two years earlier Muhammad Ali had refused induction into the U.S. army, saying “I ain’t got no quarrel with them Viet Cong.” He was arrested for draft evasion, and although he never served his five-year jail sentence, he lost several prime years of his boxing career. In 1971, the United States Supreme Court reversed his conviction.

After eight seasons with the Vikings, Kluwe was cut last spring. He believes he was released because of his activism. But he makes a distinction between the team’s coaches and front office, and his teammates.

Sixty percent of the players “supported everything I said” about gay marriage, Kluwe told The OutField. The other 40 percent agreed only in part, or disagreed. However, the punter noted, “all of them were glad I spoke out for Brendon. They recognized he had a right to say whatever he wanted, whether they agreed with him or not.” [pullquote]After eight seasons with the Vikings, Kluwe was cut last spring. He believes he was released because of his activism. [/pullquote]

The NFL is filled with smart athletes, Kluwe said. However, the league is “so corporatized,” athletes risk losing their jobs if they speak out. With limited years for their careers, not many pros are willing to take that risk.

But Kluwe was. Fortunately, he said, feedback from fans was quite positive. There was some hate mail, but not much.

Perhaps even more important was what he heard from gays and lesbians – not necessarily football fans – and LGBT youth. Many people told Kluwe that his words and actions affected them directly.

That’s been very encouraging, he said. At the same time, it’s also “depressing.” He wonders, “What does that say about our country that something I do, as simple as speaking out, will save lives? What kind of world do we live in where an athlete who speaks out is keeping kids from killing themselves?”

Kluwe is no longer an active player. But he is as active as ever, speaking at schools and to social action groups. He enjoys answering questions about everything from why he speaks out, to his favorite video games. (In addition to his football talents – and playing bass in an alt-rock band – Kluwe was a noted World of Warcraft player, and writes occasional reviews for gaming magazines.)

And, he said, he learned that “people who write angry letters don’t know how to spell.”

Are gay issues important to the NFL? Kluwe is not sure. “It’s a business that probably recognizes it has to change with the  times. They may not know completely how to do it, but they’re getting there.”

So now that he is no longer playing, what’s ahead? Kluwe promised to “keep pushing for marriage equality until all states have it.” He added, “There are plenty of places in this country where people can be fired for being gay.” That is another important issue of fairness for him.

Meanwhile, have he and his wife ever gone to a gay wedding?

He laughed. “I’ve been invited to a few. I haven’t been able to go, though, because of my schedule.”

The invitations come from people Chris Kluwe does not know personally. But they feel they know him. They count him as a friend, and they want him there to celebrate the joy he’s helped them find.