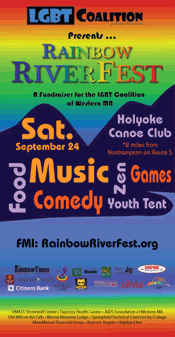 The Rainbow RiverFest/Pride of Western MA, originally known as Queer Carnevale in 2009, has been the annual fall fundraiser for the LGBT Coalition of Western MA.

Ads: Ads for this semi-glossy magazine-like publication were offered in full color and black and white to give you a wide variety of options to choose from. Additionally, ad sizes consist of full page, 1/2 page, 1/4 page and 1/8 page. Partial proceeds from this guide were provided to RiverFest’s organizers, The LGBT Coalition of Western Massachusetts.