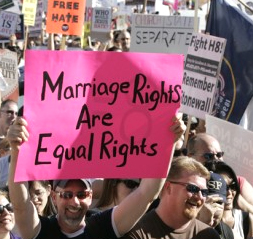 BOSTON, Mass.—Gay & Lesbian Advocates & Defenders (GLAD) filed suit today against the Social Security Administration (SSA) in U.S. District Court for the District of Rhode Island, charging SSA with wrongfully denying survivor benefits to 56-year-old Deborah Tevyaw after the death of her wife, Patricia Baker. The complaint can be read here on GLAD’s website.

Deb was married in Massachusetts in 2005 to Pat, a career Rhode Island corrections officer. Pat was diagnosed with stage 4 lung cancer and died in August 2011. Her final months were spent lobbying for marriage equality in Rhode Island, and trying to ensure Deb’s financial security. But SSA has repeatedly denied survivor benefits to Deb, who as a result has been living on virtually no income for more than three years.

“More than a year after the demise of the Defense of Marriage Act, Social Security’s misguided and mistaken application of the law is causing serious harm and distress to people like Deb,” said Janson Wu, GLAD Senior Staff Attorney. [pullquote] “I’ve lost my wife and my best friend, and Social Security has made that so much worse by telling me that in their eyes, I was not Pat’s wife,” said Deb. [/pullquote]

“I’ve lost my wife and my best friend, and Social Security has made that so much worse by telling me that in their eyes, I was not Pat’s wife,” said Deb. “Not only is that hurtful and insulting, it has meant that I am living in poverty.  I am not looking for a handout; this is money that Pat earned through hard work.”

Despite Deb’s valid marriage to Pat, Social Security initially refused in 2012 to provide Deb disabled widow’s benefits and a lump sum death payment, citing the Defense of Marriage Act (DOMA). While Deb appealed this denial, she was living on a disability income of only $723 a month. She was forced to sell her home of 38 years, leaving her destitute and dependent on friends and family.

After DOMA was struck down by the U.S. Supreme Court in June 2013, SSA continued to deny Deb’s appeal, claiming that the state of Rhode Island would not have recognized Deb and Pat’s marriage at the time of Pat’s death.

“There is no doubt in our minds that Rhode Island would have recognized Pat and Deb as validly married at the time of Pat’s death in 2011, and that Social Security’s reading of the law is just plain wrong,” said Wu.