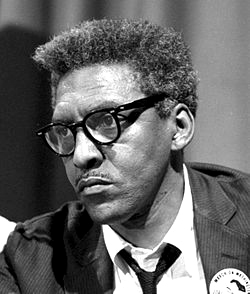 BOSTON, Mass.—The 24th annual Bayard Rustin Community Breakfast will be celebrated Saturday, March 30, 2013 from 10 a.m. to 1 p.m. at Hibernian Hall, 184 Dudley St., Boston. The Bayard Rustin Breakfast honors the roles lesbian, gay, bisexual, and transgender people from communities of color have played in the fight against AIDS. This year’s theme is “Spotlight On Care: For Self, For Others, For The World.”

Boston GLASS will receive the Belynda A. Dunn Award of Recognition, which goes to an individual of color or an organization focused on communities of color that promote HIV/AIDS awareness. Boston GLASS is a New England’s first community center serving young LGBT people.

“Young gay, African American men continue to have higher rates of HIV infection than anyone else. And Black Americans, in general, are at a much higher risk for HIV infection than the general population,” said AIDS Action President & CEO Rebecca Haag. “But we are inspired by the work of advocates like Shirley Royster and organizations like Boston GLASS, which are doing so much to help end the spread of HIV by easing stigma associated with HIV and educating others about AIDS and how to stay healthy.”

The presenting sponsor for this year’s Bayard Rustin Breakfast is TD Bank. JRI Health and HGBC Boston are event sponsors. Tickets are $10 and available at BayardRustin.org or by calling 617.450.1251.

ABOUT THE BAYARD RUSTIN BREAKFAST

The Bayard Rustin Breakfast is named after Bayard Rustin an African American gay man who worked closely with Martin Luther King Jr. in the political movements for social justice and civil rights. The Breakfast strives to reflect Rustin’s activism, humanitarianism, and artistic ideas by creating a multicultural, spiritual, and educational celebration that recognizes the roles of lesbian, gay, bisexual, and transgender (LGBT) people from communities of color in the fight against the AIDS epidemic.