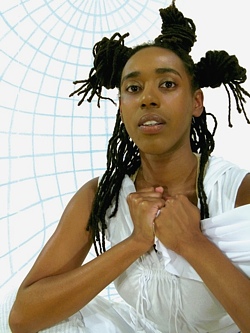 BOSTON, Mass. – “Expatriate is about African-American queer women artists looking for—not just a safe space to land—but a space from which to soar,” said Lenelle Moïse, playwright, composer, and performer of Expatriate. This October, The Theater Offensive (TTO) is proud to present Expatriate, the off-Broadway hit two-woman show featuring jazz-inspired music that complements the exploration of desire, addiction, sexual freedom, and survival. The Boston premiere of Expatriate runs three days only, October 4-6 at the Villa Victoria Center for the Arts in the South End. Ashley Sparks is directing the show.

Expatriate tells the story of achingly platonic soulmates and Boston natives Claudie and Alphine, played by Lenelle Moïse and Kara Mosley. The unsung musicians and longtime best friends bolt from their lives in Boston to create their American Dream in Paris, where they encounter fabulous success, degrading dangers, and being haunted by ghosts from their past. Moïse hopes that the local Boston flavor in Expatriate will strike a chord with audiences.

“The Theater Offensive is bringing Expatriate home to Boston!  This city taught me how to be an artist. The first concerts, theatre events and poetry readings I ever attended were at the Strand Theater, the A.R.T., the Cantab Lounge and the Lizard Lounge,” said Moïse. “I hope audiences are inspired by Claudie’s strength and Alphine’s sparkle. I hope to remind them that strength and sparkle are complicated. I hope people hum the show’s all-vocal music and repeat the play’s best lines to their best friends.”

TTO is partnering with local organizations Villa Victoria Center for the Arts, Hispanic Black Gay Coalition, YWCA, and the Center for Community Health, Education & Research to present Expatriate. These partnerships are intended to connect intersecting communities and enrich conversations about identity, exploration, and self-discovery. Moïse will participate in community events surrounding Expatriate, including helping Haitian youth from True Colors OUT Youth Theater organize a show to benefit LGBT arts groups in Haiti and leading a workshop for the at-risk queer youth in True Colors.

“In Expatriate the characters deal with culture shock when they flee a tragic scene in Boston to the bright lights of Paris. But some of the youth we work with in the Villa Victoria neighborhood say they have suffer the same shock just walking a few blocks around the South End,” said TTO Executive Artistic Director Abe Rybeck.  “On one corner they’re beat up for being gay, but when they walk just up the street a shop owner won’t serve them because they look ‘like a Puerto Rican thug.’ The play beautifully begs the question of how we can be fully ourselves where we live.”

Expatriate has received critical praise since it launched Off-Broadway at the Culture Project. Go Magazine wrote: “Armed only with their phenomenal voices and a JamMan loop machine, Moïse and Mosley perform Expatriate’s electrifying original musical score… From the concrete jungle to the Paris elite, the characters’ mutual evolution is both seamless and textured. Moïse and Mosley play their finely-drawn roles with haunting passion and precision. From scene to scene, the arc of their relationship is beautifully and convincingly rendered in this refreshingly honest and deeply moving two-woman tour de force.” Expatriate also received shining reviews from The New York Times, Variety, Backstage, and the New York Post.

“Expatriate is aesthetically sophisticated and profound,” Rybeck said. “Lenelle uses beauty and humor the way another artist might use brittle intellect or howling anger. Her luscious characters embody the scars of brutal poverty and bigotry in Boston and the outrageous determination that is also at the heart of our town.”

The Expatriate by Lenelle Moïse is presented by The Theater Offensive on October 4-6 (Columbus Day Weekend) at the Villa Victoria Center for the Arts (85 W Newton St). Tickets start at $10 & are available online: http://expatriate.bpt.me/ or at www.thetheateroffensive.org