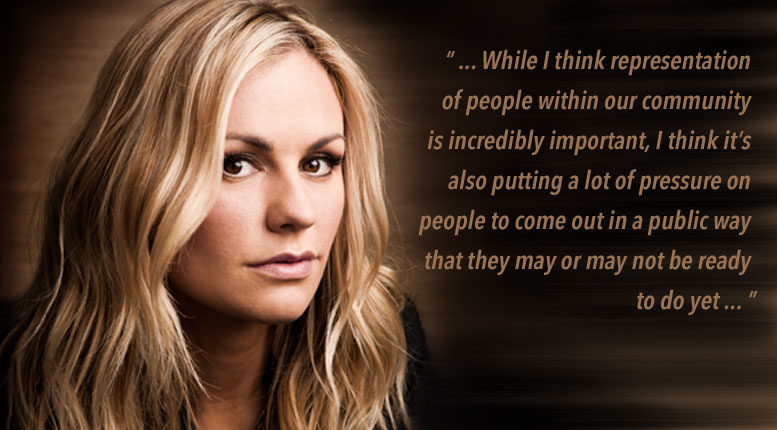 By Chris Azzopardi/Special to TRT—

Enough with the labels: Anna Paquin just wants LGBTQ people to be people. As star and executive producer of Pop TV’s Flack, Paquin’s celeb-PR spin doctor, Robyn, fascinates because her hyper-controlling nature at work is in sharp contrast to her out-of-control family life. Robyn’s bisexuality is a mere footnote.

It’s 2019. This is the queer-is-human moment Anna Paquin has been waiting for. This explains why, though she plays a lesbian character, she appreciates that her love interest (Holliday Grainger) in her upcoming film Tell It to the Bees, out May 3, eludes any kind of fixed sexual identity.

Openly bisexual herself, Paquin came out in 2010 in a public service announcement for Cyndi Lauper’s Give a Damn campaign, dedicated to LGBTQ equality. At the time, she was portraying southern heroine Sookie Stackhouse on HBO’s vampire queerfest True Blood; she married her co-star, Stephen Moyer, that same year. (The couple has 6-year-old twins, Poppy and Charlie Moyer.)

But the 36-year-old actress’ precocious career in film and TV goes back decades to her childhood, when, at just 11 years old, she won the best-supporting actress Oscar for her portrayal of Flora McGrath in 1993’s The Piano. Cross-genre roles abounded: Fly Away Home (1996), She’s All That (1999), Almost Famous (2000) and three X-Men films. In 2017, Paquin starred as a detective investigating the disappearance and murder of a trans woman (Sadie O’Neil) on the short-lived drama series Bellevue.

Nearly 10 years later, Paquin still gives a damn—about inclusivity in her work, entertainment as a way to open close-minded minds, and actors who are forced out of the closet in the name of representation.

Q: In Flack, there’s a gay scandal, a trans scandal and a lesbian sex tape, and that’s all within the first three episodes. I mean, this show was made with the LGBTQ community in mind, right?

A: I mean, not intentionally. It was just made more with, you know, the human race in mind. And that includes all of us (laughs). There’s humor and drama to be found in all of our communities, but, yes, there is definitely something to be had for our LGBTQ community in the world of Flack. Although a lot of people ask me if that was me, because obviously it’s important to me, but that was just always part of the fiber of the show in those episodes, and that was our writers. I wish I could take more credit for that, but I really can’t.

Q: As an actress, are you drawn to stories that tell our stories?

A: Yes, but I’m also just drawn to really amazing writing, and I think especially when there are stories that are our stories but are also written in a beautiful and eloquent way, that, to me, is a twofer. I mean, I love the fact that Robyn being bisexual just kind of casually drops in; it’s not a thing because it shouldn’t be a thing. And I feel like so many movies and shows, if they have characters who are leading anything other than heteronormative lives, it’s made into a big deal. It really shouldn’t be and isn’t. So I do love that part of the show.

Q: It sounds like you don’t think we’re at a place where LGBTQ characters can simply live within the fabric of the world, and maybe that’s because LGBTQ people can’t just yet either.

A: Are we? (Laughs) I mean, I think everyone has different experiences. I really think it depends what part of the country you’re in and what kind of community you grow up in. Look, I’m a non-American-born Canadian-Kiwi living in liberal California, so my experience of the world as a bisexual woman is probably incredibly different from someone who lives in —not to single anyone out in particular, but let’s say a less progressive state. So I feel like we still have a ways to go, but we’re obviously going in the right direction.

Q: Where do you stand on the debate that exclusively LGBTQ actors should be playing LGBTQ roles?

A: In casting all the characters in this show it would never have occurred to us to look at anyone other than trans actors for trans roles. I frankly did not ask the actress who plays Robyn’s ex-girlfriend because I also don’t really think it’s any of my business. What’s tricky around some of that stuff is that, while I think representation of people within our community is incredibly important, I think it’s also putting a lot of pressure on people to come out in a public way that they may or may not be ready to do yet. I don’t think it’s anyone’s place to force people out of the closet, to be like, “Hey, you shouldn’t be playing this role because you’re not gay.” Well, what if that person is but isn’t comfortable coming out? Where does that leave us as far as representation, but also respecting people’s own timeline for their own lives and what they’re comfortable with? I think it’s incredibly complicated.

Q: Was there pressure on you when you came out?

A: If there was, I certainly didn’t experience any. Everyone in my private life knew. It wasn’t a big deal. But also, things aren’t a big deal if you don’t make a big deal of them.

Q: I’d like to note that your show Bellevue represented the trans community in a very real way. I know you really bonded on the set with actress Sadie O’Neil, who played a trans character.

A: What an awesome, smart, talented actress and writer and poet. She was incredibly patient with all of us who know less about her community asking quite specific questions as far as how we’re representing the community on the show. Because the script, you can do a good approximation, but if that’s not the life that you have lived then, obviously, you’re not gonna get all of it right. And being patient with the fact that we had taken a good stab at it, but then wanting to actually get it right, was something we were really very grateful for, and we obviously very much deferred to her on a lot of it.

Q: In what ways was the show and being with Sadie on set a teaching moment for you?

A: It’s one thing to conceptually support all members of our rainbow community, it’s another thing to pretend that you know what somebody else’s life experience is like, and I don’t pretend to know things I don’t know. So, to me, getting more information is something that I just think you can’t have enough of. And the more you know, the more helpful you can be. It literally had never even occurred to me that feminism could exclude trans women. That, to me, just doesn’t make any sense, and that’s a huge deal and kind of blew my mind. You know, these kinds of conversations that end up casually happening because you’re working with them and getting to know them, it’s like, “Wow, I feel a bit embarrassed that I didn’t know that and I’m glad I know that now.”

Q: Does it mean something to you that a role such as Robyn or your role as Dr. Jean in Tell It to the Bees is creating greater visibility for the LGBTQ community?

A: Absolutely … absolutely! Yes. I think that people learn about people they don’t understand through entertainment. That’s one of our most powerful tools for bringing people out of their own bubble and their own world, because if you see somebody depicted on screen you sort of are emotionally connected to that person and their story and their life, and maybe it can change people’s minds about how they sort of snap-judge other people and their sexual orientation or gender identity or whatever it may be. I think entertainment is a very powerful tool for that, so yeah, it’s very meaningful to me.

Q: When were you first aware that entertainment had that kind of power?

A: Honestly, not really until I was a grown up because when I was a teenager just, you know, doing my thing and going to school, I wasn’t massively conscious of it. Becoming a parent I think also makes you more aware of that, the cause and effect when your kid watches something and repeats something back that you’re like, “We don’t speak like that.” You get to see a very tiny microcosm of what its effect is, just even on little humans, because they don’t know. But it’s all around us. That’s not to say that all entertainment that I do (laughs) can be watched by all people of all ages, because I do some stuff that is, obviously, very adult-oriented, but it has made me think about what kind of things I put out there into the world.

Q: In Tell It to the Bees you play your first explicitly queer character in film.

A: In a film, yes. But my character in (2017’s sci-fi anthology TV series) Electric Dreams was also a lesbian.

Q: Why did it take so long?

A: It wasn’t really a conscious thing. A lot of times with choices it kind of depends on what material comes your way and when. I hadn’t happened to have a proper lesbian love story of any sort really come my way prior to that. I think I was probably somewhat obvious casting for that (laughs). But it’s a beautiful love story, it’s set in the 1950s in Scotland, my character is adopted, basically got outed as a teenager and left her community under quite traumatic circumstances. (She) falls in love with another outsider, a young mother in the community who is—we don’t ever really put a label on her sexuality, but it’s probably more on the bisexual-to-straight-but-falls-in-love-with-the-human. It’s about what they bring out in each other.

I’m surprised to hear that you haven’t been offered more queer film roles.

I was on a TV show for, like, the entire time surrounding (coming out), so I wasn’t really available to do anything else (laughs). And also, True Blood reps hard on the Pride front.

How aware were you of what True Blood was doing for the LGBTQ community at the time it aired?

Vampires coming out of the coffin: the metaphor was pretty specific! (Laughs) And also just the sexual fluidity of all the vampires. Obviously, we would have to have been living under a rock not to have felt the support and love from the community.

Do you hear from gay fans about Flack on Twitter?

In general, yes. Whenever I’ve done work that has any representation of our community, yes, I always end up hearing really cool, nice feedback from people who are appreciative of conversations being easier to have because they’re happening in the public eye.

*As editor of Q Syndicate, the international LGBTQ wire service, Chris Azzopardi has interviewed a multitude of superstars, including Cher, Meryl Streep, Mariah Carey and Beyoncé. His work has also appeared in GQ, Vanity Fair and Billboard. Reach him via Twitter @chrisazzopardi.