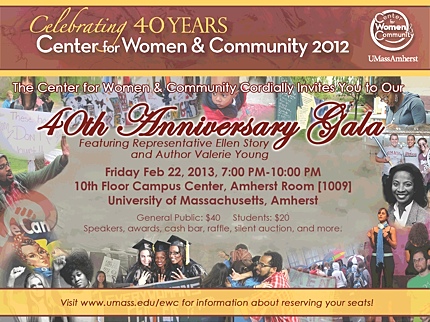 AMHERST, Mass. – The Center for Women & Community (CWC) at the University of Massachusetts Amherst will mark its 40th anniversary with a gala celebrating women’s achievements on Friday, Feb. 22 from 7-10 p.m. in the Amherst Room of the Campus Center.

Formerly known as the Everywoman’s Center, CWC is one of the oldest continually operating women’s centers in the country. According to Everywoman’s Center: Evolution of an Alternative, a “herstory” penned by its founders, an organized collective of Pioneer Valley women approached UMass Amherst in the early 1970s about the educational and vocational needs of area women.

The Everywoman’s Center was officially launched in the fall of 1972 as a project of the Division of Continuing Education with two paid staff and a focus on assisting “mature” women in obtaining their educational and career goals.

Forty years later, the Center for Women & Community has a new name and re-written mission statement that better reflect its current services and constituency. The center employs 12 professional staff, has nearly 50 volunteers and interns, and offers a broad range of programming, including events that focus on women of color and the local Spanish-speaking immigrant community. Counseling services are available to men, women and transgender people. More than 50 percent of the operational funding for the center comes from outside the university in the form of grants from the state and federal governments and private foundations.

Speakers at the gala will be state Rep. Ellen Story, who will relate her experience as a female legislator, and UMass Amherst alumna Valerie Young, who will discuss the imposter syndrome and sign copies of her new book “The Secret Thoughts of Successful Women.” Jean Kim, vice chancellor for student affairs and campus life at UMass Amherst, will introduce the speakers.

State Sen. Stan Rosenberg is also slated to present a legislative citation recognizing CWC for its 40 years of service to the community.

CWC will also present its leadership and advocacy awards to several Pioneer Valley women whose efforts have changed the community in positive ways.

The event will feature hors d’oeuvres, a cash bar, raffle and a silent auction. For more information, visit the CWC website, www.umass.edu/ewc, or call 413-545-0883.

Creep of the Week: Trump Voters Asking For Forgiveness