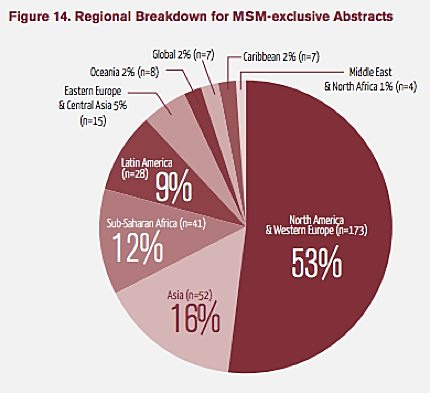 A new report produced by a coalition of global advocacy organizations shows that the International AIDS Conference (IAC) program continues to lack meaningful coverage of populations most-at-risk for HIV, including men who have sex with men (MSM), transgender people, people who inject drugs (PWID), and sex workers. Over 220 organizations from more than 70 countries around the world have called on the organizers of the IAC to take concrete measures to increase coverage of HIV-related issues concerning the health and human rights of these populations worldwide.

The report features a systematic quantitative audit and qualitative analysis of the topics and countries covered by abstracts on most-at-risk populations at the 2012 IAC, also known as AIDS 2012. These populations are also called “key populations,” because they are both key to the epidemic’s dynamics and key to the response. As an in-depth examination of research presented at the world’s premier AIDS conference, the report also offers a glimpse into the current state of research on these key populations globally. [pullquote]“This meager level of coverage on issues concerning our communities at the International AIDS Conference is unacceptable,” said Dr. George Ayala, Executive Director of the Global Forum on MSM & HIV (MSMGF) and co-author of the report.[/pullquote]

The quantitative audit of the AIDS 2012 program showed that only 17% of all abstracts presented at the conference were exclusively focused on MSM, transgender people, PWID, or sex workers. Some key populations were better represented than others. The percentage of all abstracts exclusively dedicated to each key population was 8% for MSM, less than 1% for transgender people, 5% for PWID, and 4% for sex workers.

“This meager level of coverage on issues concerning our communities at the International AIDS Conference is unacceptable,” said Dr. George Ayala, Executive Director of the Global Forum on MSM & HIV (MSMGF) and co-author of the report. “Not only was there a comparatively low number of abstracts on key populations at the conference, but the content of these abstracts was largely divorced from the most urgent needs of key populations as identified by members of the populations themselves.”

The report cites the body of abstracts at AIDS 2012 focused on MSM as an example of the gap between the kind of research prioritized by key population stakeholders and the kind of research ultimately presented at the conference. Ahead of AIDS 2012, the MSMGF conducted a global survey of nearly 300 MSM advocates and service providers around the world to identify the topics they felt would be most important to address at the conference. The top three themes were “Prevention,” “Stigma and Discrimination,” and “Law and Criminalization.” Of all abstracts presented at AIDS 2012, the percentage dedicated to these themes in relation to MSM was 1.6%, 0.5%, and 0.3%, respectively.

“The poor coverage of topics concerning key populations, especially from lower-income countries, may reflect inequitable global funding for research on key populations as much as it reflects the IAC’s processes that reinforce these inequities,” said JoAnne Keatley, Director of the Center of Excellence for Transgender Health at the University of California, San Francisco and co-author of the report. “The IAC’s organizers must update the conference’s processes to ensure the event is as valuable as possible for addressing the urgent HIV epidemics among key populations. As the premier platform for sharing the latest research on HIV and AIDS, it must lead the global AIDS research field to do the same.”

“The IAC represents a unique and powerful opportunity to impact the global AIDS epidemic,” said Anastacia Ryan, Global Policy Officer on HIV and Sex Work at the Global Network of Sex Work Projects (NSWP). “The conference offers unparalleled potential to shape the industry’s discourse, funding priorities, and locus of scientific inquiry, giving key affected populations the recognition they deserve as partners in fighting the epidemic. By updating its processes to increase meaningful engagement with and coverage of key populations, the IAC will not only support the development of more effective strategies to address the needs of key populations, it will bring the global AIDS response closer to developing the comprehensive solutions we need to end the epidemic.”

The full report, entitled “Coverage of Key Populations at the 2012 International AIDS Conference,” is available online at http://tiny.cc/gofwyw. The report was jointly produced by the Global Forum on MSM & HIV (MSMGF), Global Action for Trans* Equality (GATE), the Center of Excellence for Transgender Health (CoE), the Harm Reduction Coalition, the International Network of People Who Use Drugs (INPUD), Different Avenues, and the Global Network of Sex Work Projects (NSWP).

The full list of recommendations and endorsements can be found online at http://tiny.cc/rpfwyw.