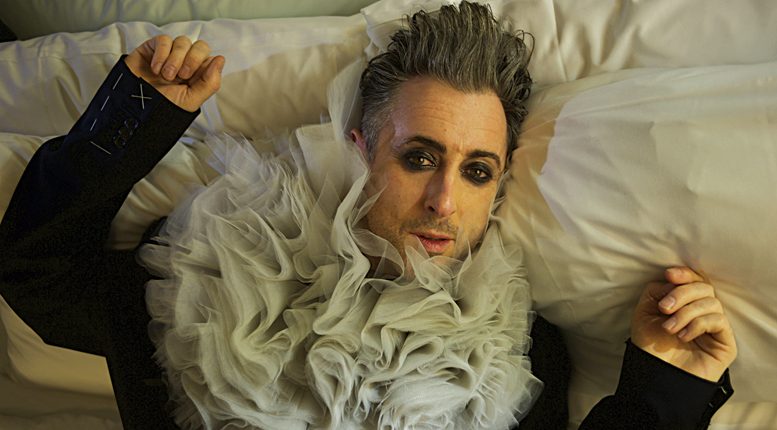 Q: You’re pretty naked on that album cover. Are you wearing anything?

A: I’m not wearing anything! I was performing at the Carlyle and (photographer Jordan Matter and I) ended up texting dancers at 2 in the morning to see if they wanted to come over to the Carlyle and get naked. Two did, and we did that photo. Just took our clothes off at 2:30 in the morning.

Q: How do you explain your appreciation for music that makes you cry?

A: For me it’s about connecting personally. These songs are songs that have things in them that I can really understand. I feel my singing them makes people listen to them in a different way, maybe. But, really, they’re all songs that I felt compelled to sing because I connect to them in an emotional way.

Q: Which one resonates with you most?

A: I think it would be “Dinner at Eight.” I find that really quite difficult to get through some nights because I think about my dad. I do normally shed a tear during that song. Yeah, it’s really difficult, and you have to go with it and understand that it’s emotional because it’s an emotional song and you’re connected to it and the audience is really with you. I’m not incapable of getting through the song and I am really crying, but I think that’s all right. It makes sense. It’s a song that’s gonna be hard to sing. As long as there’s no falling to the floor into a heap of tears, I think it’s actually all right to show your emotion. In a way, the whole show is about me showing my emotions.

Q: The album’s coda is “The Ladies Who Lunch,” made famous by the late Elaine Stritch in Company on Broadway. Elaine was a beloved presence at the Carlyle up until she performed her last show there in 2013. Is your performance of the song in that space a tribute to her?

A: Years ago I did a workshop with John Tiffany who directed me in Macbeth. We did this workshop of Company, and a lot of the couples’ genders were changed, so I was playing the Elaine Stritch role. I sang that song in the workshop. I thought it worked really well, but ultimately it didn’t go any further. Then when I was doing this show I thought, “I can’t not sing that song at the home of Elaine Stritch.”

When I was doing Cabaret, in my dressing room I would always turn on Elaine singing “Ladies Who Lunch” as the last song. Whenever it came on, it was time to go. Everyone would be quiet and listen to the song and then at the end everyone would go crazy and that was the end of the night. So, she has a very special place in my life in a lot of ways. By doing it in that venue, this is very much a tribute to her.

Q : Your résumé is expansive. When a gay guy stops you on the street, which career endeavor of yours are they most likely to compliment you on?

A: It’s very difficult to tell nowadays—it really is. You know, some mention the Romy and Michele thing. But now it’s really hard to tell. It may be my book (Not My Father’s Son: A Memoir); it’s a variety of things. With lesbians, I know it’s always gonna be The L Word.

Q: Having accomplished as much as you have, what’s been a career highlight for you?

A: The things I’m most proud of are the things that are the most personal, the biggest challenges. I thought I was never going to be able to do Macbeth on Broadway. I thought I was going to die.  Doing Alan Cumming Sings Sappy Songs is really an amazing thing because I am sort of being myself. Also, my book a couple of years ago – that was a great sort of achievement because it was a terrifying thing to do. It was so vulnerable. For me, personally, it’s the things that I might have failed at, or when I make myself really vulnerable in a personal way. Those are my best achievements.

Q: What about ones that were not your best achievements—do you regret those projects?

A: I don’t. If you’re happy where you are then it’s impossible to regret things, because everything you’ve done has made you who you are as a person and who you are at the moment. I get snarky journalists saying, “Why did you do this, blah, blah?” and I go, “Why do you think I did that?” Because it made money! People get a bit offended that you’ve done some commercial thing, but I did those things in order to do XYZ, (projects) that don’t make very much money. So, I’m actually doing you a favor by doing those things that make money.

So I don’t really regret. I’m not a regretter. There are things I had a terrible time on, and at the time I was like, “F@ck, I didn’t know it was gonna be like this. I thought it was gonna be great fun,” but there were asshole people and the experience went wrong. Ultimately, there’s always something you can learn a lesson from. And nobody died, hopefully.

Q: As a bisexual person yourself, you’re known for being outspoken on bisexuality and gender fluidity. How do you explain bisexuality to people who still don’t get it?

A: I’m not here to change people’s minds about whether they believe in bisexuality. All I’m saying is that I think my sexuality and most people’s sexuality is gray. And yeah, I like c@ck. I love c@ck. But I also feel that I have an attraction to women. I’ve never lost it, actually. I’ve always been attracted to both sexes, and whether I act on it or not is not anyone’s business, really. I’m not going to close myself off to the possibility of experience just because society says we must stick within these rigid boundaries. I find it really self-hating that the gay community, which has been so bullied, are especially the ones who might be chiding people about their bisexuality. I think, let everyone be who they are.

The point I’m making is that it seems more ironic for a gay person to chide someone about their sexuality—they’re chiding all of us at heart. It seems particularly galling that that would be coming from a fellow LGBT person. I really do believe people today, especially young people, have a much more fluid idea about sexuality and gender, and I should think we’re in a really great place with the youth of today. It’s people who are a bit older who are still struggling with it.

Q: Reflecting on your early days as an activist: Why was it so important for you to start speaking out on LGBT issues?

A: I have a voice. I have a platform. I have a great life. I have a really great life, and I live the way I want to live. I am the person I want to be, and I feel like it’s my duty to take care of people who don’t have those opportunities. I have a personal connection to people who have been prejudiced against who are gay or bisexual or transgender. I’m Scottish and I grew up with fairness and justice. Where I come from, it’s very important that we adhere to making sure that everyone is looking after each other. So, it’s partly my genetic makeup (laughs), but also in the privileged position that I am in, I feel it’s my duty to give back and help other people along. Being an artist is understanding other people and wanting to reach and connect with other people, so helping other people is absolutely a part of that. When there’s injustice and persecution, I can’t really live in a society with that going on and not do something about it.

*Chris Azzopardi is the editor of Q Syndicate, the international LGBT wire service. He once made Jane Fonda cry. Reach him via his website at www.chris-azzopardi.com and on Twitter (@chrisazzopardi).