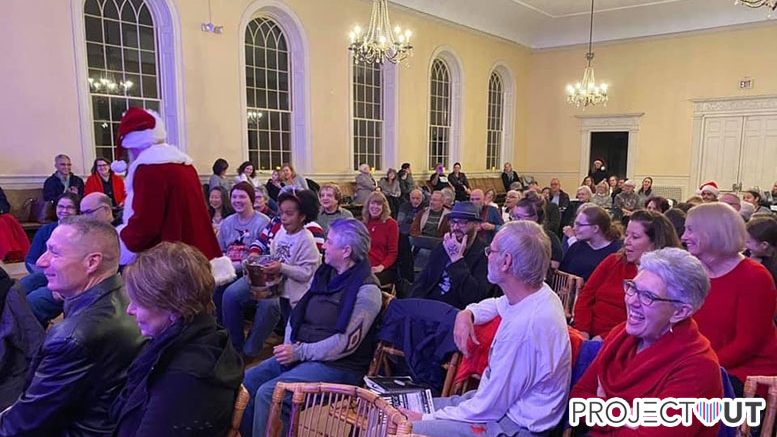 Attendees of the Holiday Classics concert attend the event prior to the pandemic when it was in person; Photo credit: Project Out, Inc.

4th Annual Holiday Classics Concert Is a Fundraiser To Benefit Project Out, Inc.; Eastern Bank Main Sponsor of the Event

SALEM, Mass.—Project Out, a Salem-based 501(c)3 organization dedicated to serving the needs of the transgender and gender diverse community, TGD, will bring its 4th Annual Holiday Classics Concert & Telethon to your living room or smart device on December 17 at 7 p.m. This virtual holiday concert and telethon will be broadcast on Salem Access Television, SATV, and Facebook Live.

Due to the ongoing pandemic, and in an attempt to help keep the community healthy, the non-profit organization opted for a virtual event this year, instead of holding the popular show & fundraiser at its usual location, Salem’s Old Town Hall.

“We are excited to bring this first-ever telethon format to viewers,” said Graysen M. Ocasio, Co-Executive Director, Project Out. “We have outlined a fantastic night that has the potential to reach thousands of viewers this Holiday season.”

Nicole EnRose, an award-winning mezzo-soprano, will be the featured performer of the night, as she has been for the past three years. EnRose has donated 100% of her time and voice to Project Out, Inc. since the organization’s work began.

In attendance each year are Rep. Paul Tucker and his wife Ann. From the first performance, Rep. Tucker called the benefit performance “spellbinding” on his social media.

“What a night for a terrific organization,” he said via FB.

Viewers can expect a night of some of the season’s best holiday music, messages from special guests like State Rep. Paul Tucker, Salem Mayor Kim Driscoll, and maybe even Santa himself, among others. The broadcast is scheduled for a two-hour slate, ending at 9 p.m.

“We are so grateful to Nicole’s ongoing contributions to use her voice, literally, to amplify the needs of some of the most marginalized amongst us in Salem and outside its borders,” Ocasio said.

Project Out, first found in 2018, was established to improve the lives of those who are transgender or gender diverse, by providing life-saving access to services and gender-affirming training programs for mainstream audiences, according to the organization’s website.

“We’ve proudly worked with organizations of all levels in the healthcare industry, in education, in municipal settings, and on a one-to-one basis,” Ocasio added. “With an incredibly diverse board of directors, Project Out has a unique and inclusive perspective on how to best move forward with the services that are offered to ensure we are not leaving anyone behind. Through this end-of-the-year fundraiser and the generous donors who firmly believe in our work are some of the reasons why Project Out has flourished.”

The Gold sponsor for this year’s Holiday Classics Virtual Concert and Telethon is Eastern Bank, a community partner that has supported the organization since its inception, Ocasio added.

“Our entire team is incredibly grateful to Eastern Bank for their relentless support to social and economic justice in our community,” he emphasized. “They have been a critical partner of Project Out from the beginning, and they represent exactly how business leaders can also lead with the truest sense of bringing compassion, advocacy, and hope to all marginalized communities here at home and throughout New England.”

Local partners this year include SATV, which will be broadcasting the event at 7 p.m., and media partners: The Rainbow Times and Trans Headlines Zine.

The Holiday Classics Virtual Concert and Telethon can be viewed on Facebook Live and SATV on December 17 at 7 p.m. To sponsor this event, contact info@projectout.org for unique sponsorship opportunities. To attend the show on Facebook Live, visit https://is.gd/Trrri0.

To learn more about Project Out’s programs and services or to donate to the organization, visit Project Out online at projectout.org.