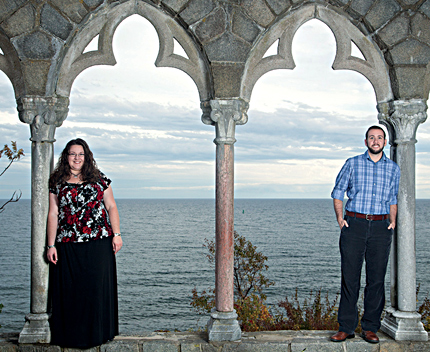 As Valentine’s Day approaches, The Rainbow Times reminds readers that love is in the air.

Nelson Roman and his partner Manny Hernandez; John Trobaugh and his husband Jeroan Allison; Mason Dunn and his wife Lauren Willford; Andi Wheeler and her fiancée Meredith Munn; and Paul Fahey and his partner Benny Chan shared their secrets to a long, happy, and healthy relationship as well as some plans for the big day.

When asked about the secret to a healthy relationship Roman and Hernandez, who have been together for over six months, said many ingredients go into the recipe of relationships.

“To me, the secret to any relationship begins with trust,” Roman said. “Add in some respect, genuine friendship, open and honest communication, fun, laughter, romance, and random acts of showing each other you love one another, and you should have the foundation.”

“It all begins with communication,” Hernandez added.

Fahey, who has been with Chan since July of 2014, said communication was the key to getting through the good and bad times.

“Obviously openness and honesty is important, but just as much so are those occasions where one or both of us makes a mistake and has to address something that can be embarrassing or painful,” he said.

Trobaugh, who has been with his husband for 25 years and has a 10-year-old son named Ryan, said acting out of love and compromise were most important.

“People say love is a verb and I believe it,” Trobaugh said. “When we were just friends and dating we made sure that our core values were in line with each other’s. We both have a strong sense of contributing to society and giving back in a variety of ways.”

Wheeler said making space for your significant other to grow is “super important.”

“Being part of a couple is wonderful and fun, but it’s also important to grow as separate individuals,” Wheeler said. “If you hold your partner back or put your own needs on the back burner, it can hurt the relationship.”

For Dunn and Willford, who met at summer camp while in college, the “secret” is no secret at all.

“I don’t think it’s as easy as one thing, nor should it be a secret,” Dunn said. “For us, it’s been about communication, patience, and authenticity.”

“One of the secrets for us is that while we are partners, we started out, 11 years ago, as friends,” Willford said.

“Her compassion is towards the top of my list,” Dunn said of Willford when discussing their long-last relationship. “She has a never-ending well of kindness and compassion that extends to children, animals, and people.”

“He’s not afraid of challenges, or getting into the struggle of problem solving,” Willford said. “He’s a bit of a perfectionist, but he works hard to bring out the best in everything he puts his mind to.”

Trobaugh said the differences between he and Allison were what attracted them to each other.

“Our personalities couldn’t be more different,” Trobaugh said. “I’m an artist and he is a scientist. My favorite part of my husband’s personality is his genuine inquisitive nature.”

He said Allison is prone to asking questions to get to the root cause of a problem or a bad mood or simply commit a random act of kindness.

Fahey said he admires Chan’s sense of humor and his approach to life.

“He is passionate about travel, which we share, and music, which we don’t,” Fahey said. “I love seeing him express that passion and share those feelings with me. I do the same with him about books and politics.”

Wheeler said she is fortunate to have a fiancée with an ability to prepare for the future.

“She’s always working to make our future together better,” Wheeler said. “She’s able to see how things will evolve and do the planning that I’m so bad at. We have such a bright future together and it’s all because of her.”

“He makes me laugh, smile, and always knows how to make me laugh,” he said.

Hernandez said he found Roman’s youthful and passionate spirit the most attractive and that the personality traits were so numerous he didn’t know where to begin.

“The first thing that comes to mind is Nelson’s sincere heart,” Hernandez said. “Nelson continues to wear his heart on his sleeve. Also, Nelson has the heart of a child and like myself enjoys the simple things in life.”

Plans for the special day

“We actually don’t have any plans for Valentine’s Day,” Wheeler said. “I’m a fly-by-the-seat-of-my-pants type of person.”

Fahey said he and Chan have plans to go to New York City for the weekend to catch the last showing of “Allegiance,” the musical inspired by the life of former “Star Trek” star and social media personality George Takei, and have a nice dinner.

“Nothing too romantic, just time together,” he said.

For Dunn and Willford, it’s also not about one day.

“We work hard to appreciate each other all year long,” Willford said. “We do however have a tradition on February 15 of going to CVS and getting chocolates when they go on sale.”

Roman and Hernandez both said Valentine’s Day does not hold any special plans, but they said special occasions are not reserved only for one day of the year.

“Every day is Valentine’s Day for me because I have him,” Hernandez said.

“We truly love to live in the moment and try and make every day and weekend we are together special,” Roman said.

Trobaugh agreed showing the value in a relationship should not be pushed into one day.

“We do celebrate with cards and dinner, we just don’t go over the top,” he said. “For us it is more important to go over the top with comfort when the other is having a bad day or gets unwelcome news. That’s how we celebrate Valentine’s Day, all through the year!”

Valentine’s Day: Are You Ready For It?