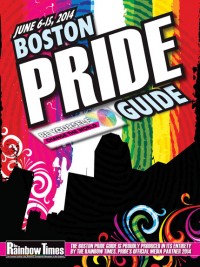 The New England Pride Map 2014 began to be distributed in May, 2014 and will continue to be distributed throughout Pride season (September, 2014). Filled to capacity with advertisements throughout New England, this pocket-size glossy piece features information about Pride celebrations in the region, Pride parade routes, Pride-related events, and more. The New England Pride Map is back via popular demand and The Rainbow Times thanks its supporters (advertisers) who made it another success again ths year.

The Boston Pride Guide 2014, proudly produced on Eco-Friendly paper using biodegradable ink, is available as an insert in The Rainbow Times‘ June 5 edition (Pride issue), and as a free-standing magazine distributed throughout the 10-day Boston Pride celebration. The advertising support in this piece allow The Rainbow Times to be able to produce it, year after year and care for equality and diversity. Show them your support by letting them know you saw their ad in the only Guide dedicated to Boston Pride.

Look for both of these popular pieces at Pride celebrations in New England, at all Boston Pride 2014 events, online, and in The Rainbow Times.

The Rainbow Times is the proud official media partner of  Boston Pride and sponsors many New England Prides in the region.

The Rainbow Times Moving on: Full Steam Ahead, a Brief