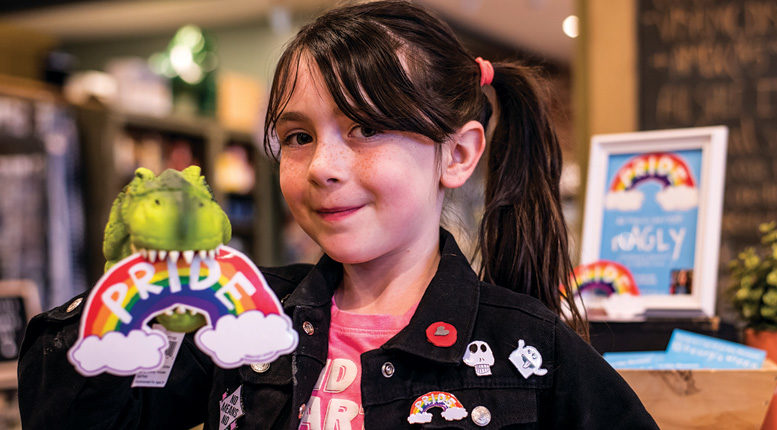 At 2 years old Georgia Wrenn was already a budding entrepreneur

SALEM—In 2016, a 10-year-old from Colorado appeared on Shark Tank with a business idea about “lemonade stands” and he was offered a deal by Billionaire investor Chris Sacca, according to the Denver Post.

Yet, pre-dating the boy in 2013, a 2-year-old in Salem Mass. had already started her entrepreneurial business similarly, but with a commitment to give back to humanity too, not merely just for-profit. Her father, Sully’s Brand owner Chris Wrenn, 43, explained that his daughter’s first lemonade stand was “recycled out of discarded pallets’ from his office, which he “built when she was two years old.”

“I got my lemonade stand when I was 2 and started selling lemonade for the YMCA at 3 and at 6 I started Georgia Made This [her website]”, said Georgia Wrenn, who will be 8 this summer, to The Rainbow Times.

Shortly after turning just 3, Georgia, one of the youngest businesspersons in the commonwealth, was invited to sell lemonade at the Salem Peabody Essex Museum, PEM. According to her father, she donated “all of the money earned, a couple of hundred dollars, to the Salem YMCA children’s center where she was a weekly visitor.” That was the youngster’s first fundraising effort. Her parents were behind the idea to teach their daughter about contributing to the community and helping others who are in need.

“This is something that has been very important for both Georgia’s mother, Elisabeth and I,” said Wrenn. “Giving back is one of the most important lessons that we can teach Georgia as she learns to be a little business person.”

Art runs in the family

Georgia, according to Wrenn, has been “drawing since she could hold a crayon.” But, creative talent isn’t a foreign concept to him or his father. Wrenn uses that talent when he showcases his art through Sully’s, the company he founded. That’s also when his fine arts degree comes in handy.

“I built a little table for her to draw at and she spends part of every day sitting at it,” he said. “Her grandfather Roro is a landscape painter, so it runs in her family. I work with her to pick each item to have made, and I order them all through my company.”

Drawing on a T-Shirt

What Georgia does today started in 2017, when Wrenn’s own company (Sully’s Brand), which has catered to Boston sports fans for 20 years, gathered her art and put it on a t-shirt during Halloween at their vendor table.

“In 1st grade, I drew three drawings at first and my dad made them into pins and shirts of each character” said Georgia, explaining how her art first got noticed.

“I thought it would be cute to make something different that repped the Witch City with Georgia’s art,” Wrenn remembers. “She drew a skull, ghost and a jack-o-lantern and they turned out so cute, but when I got the shirts in I remember thinking ‘oh man, I hope our friends and family buy these!’ Thankfully, tourists loved them and they sold out that weekend. We had to print more for our friends!”

What makes this family and Georgia unique is that her business continues to give back to the community and to other disenfranchised groups.

“My mom is a social worker at HAWC (Healing Abuse Working for Change) and I know the golden rule is treat people the way you want to be treated,” said the almost 8-year-old entrepreneur and philanthropist.

Recently, Georgia designed a new piece and decided to donate all proceeds from this item, a rainbow pride pin, to an LGBTQ-youth organization, nAGLY. The pin was recently released, just in time to celebrate the LGBTQ community.

“Pride month was coming and the rainbow represents the colors of nAGLY,” Georgia said. “nAGLY helps a lot of kids. And I’m nice, and a business owner, and part of a community. nAGLY gives kids a place to go.”

Not only is she busy with school, business, and philanthropy, Georgia still finds time to volunteer for noble causes.

“Georgia has also been a volunteer at a soup kitchen in Lynn, Mass. called My Brother’s Table, where her aunt is the operations manager and has visited with and assisted that population since she could walk on her own,” said Wrenn proudly.

Future plans include possibly adding a transgender flag color piece to her collection.

“She’s had several requests since launching this collaboration with nAGLY, so we are going to work on something new,” Wrenn added.

When she thinks of herself in terms of what’s she’s doing, the talented artist explained how she finds joy in what she does.

“It’s also fun to be one of the only kids in my school that has their own business,” Georgia said.

Georgia’s Pride rainbow pins, patches, and stickers are available online at GeorgiaMadeThis.com, in Salem at Roost & Company, and at nAGLY. Read Georgia’s blog and check out her Instagram Page here.