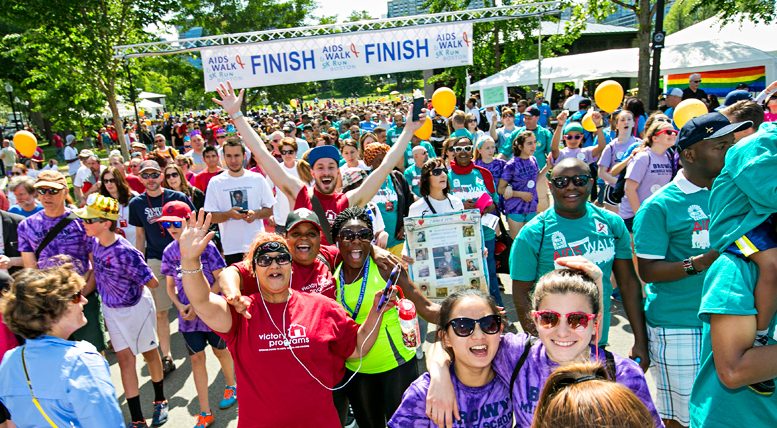 BOSTON, Mass.―Registration is now open for the 31st annual AIDS Walk Boston & 5K Run, which will take place Sunday, June 5, 2016 at the Hatch Memorial Shell on the Esplanade. The event regularly draws thousands of participants, making it AIDS Action Committee’s largest annual fundraiser. The Walk is 6.2-miles. The 5K Run is a competitive, timed event fully sanctioned by the USA Track & Field Association.

The AIDS Walk & 5K Run will begin and end at the Hatch Memorial Shell on the Esplanade. Registration and check-in begins at 7:30 a.m. After opening ceremonies at 9 a.m., the 5K Run begins at 9:50 a.m. and the Walk sets off at 10 a.m. WCVB-TV Eye Opener Newscaster Randy Price will emcee the event, which also includes a Wellness Festival, presented by Whole Foods Market, a post-walk celebration of healthy living.

Participants can register for the AIDS Walk & 5K Run at www.aidswalkboston.org. There is neither a registration fee nor a minimum fundraising requirement to participate in the Walk. There is a $35 registration fee for the 5K Run. For the month of May, the events 5K Run Match Sponsor, The TJX Companies will match running fee.

AIDS Action expects to raise approximately $1 million from the event.

“We raise more than money for the life-changing services offered by AIDS Action at our annual AIDS Walk. We also raise awareness that about 700 people a year in Massachusetts are newly diagnosed with HIV, and that we need to continue our outreach and prevention efforts in order to get to zero new infections,” said AIDS Action Executive Director Carl Sciortino. “Those who are living with HIV also need support to manage the disease and be as healthy as they can be, which dramatically reduces the likelihood that they will pass HIV on to anyone else.”

Follow @AIDSWalkBoston and the hashtag #AWB5K for information about HIV/AIDS and the Boston AIDS Walk.

Facts About HIV/AIDS in Massachusetts

–Between 2000 and 2013, the number of people living HIV/AIDS in Massachusetts increased 53%, placing substantial demands on existing prevention and treatment programs.

–Blacks make up only 6% of the state’s population, but they comprise 30% of those living with HIV/AIDS.

–Hispanics make up only 10% of the state’s population, but they comprise 25% of those living with HIV/AIDS.

The AIDS Walk was first held in 1986 and is one of the first fundraising walks to be introduced in Boston, as well as the country. The 5K Run was added to open up fundraising to runners. Historically AAC’s largest fundraising event, it has raised over $39 million for programs and services to support those living with and at risk for contracting HIV/AIDS.

AIDS Action Committee of Massachusetts is the state’s leading provider of prevention and wellness services for people living with and at risk of HIV/AIDS. AIDS Action works to stop the epidemic by eliminating new infections; maximizing healthier outcomes of those infected and at risk; and tackling the root causes of HIV/AIDS. Founded in 1983, AIDS Action is New England’s oldest and largest AIDS service organization, advocating for the needs of people living with HIV/AIDS  by educating the public and health professionals about HIV prevention and care; and promoting fair and effective HIV/AIDS policy at the city, state, and federal levels. In 2013, AIDS Action Committee of Massachusetts entered into a strategic partnership with Fenway Health, allowing both organizations to improve delivery of care and services across the state and beyond.