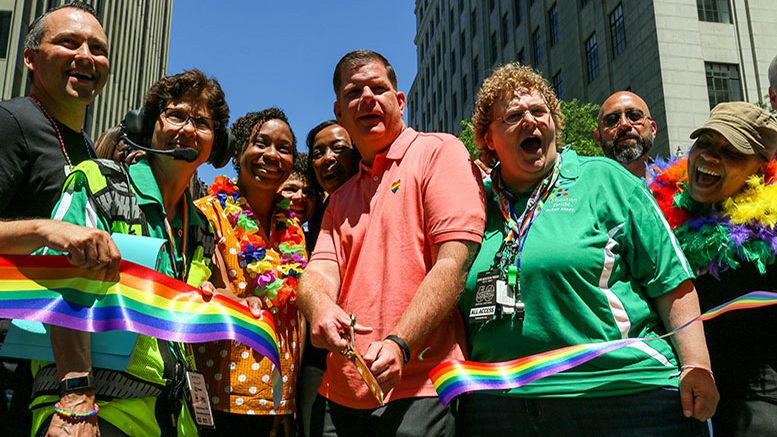 One of the highlights of this year’s Pride Parade was the two large flags that will also be appearing in World Pride in New York City on June 29. The Unity Flag, a patchwork quilt flag that represents intersectionality and unity in the LGBTQ community, and the River of Pride Flag, a quarter-mile long rainbow flag both ended the Pride Parade.

“This year’s parade was both a celebration and a reflection of this year’s theme—Looking Back, Loving Forward—a recognition of the 50th anniversary of the Stonewall Uprising and the challenges and victories our community has faced over the years,” said Linda DeMarco, President of Boston Pride. “We are wicked proud for all the support from our community and allies to help make this year’s parade one for the record books with one-million attendees and more contingents than we have ever had.”

Another highlight was two Stonewall veterans, Charles Evans and Paul Glass of Falmouth, Mass., who joined Grand Marshal Dale Mitchell during the parade. Mitchell, Evans, and Glass are all veterans of the Stonewall Inn Uprising in 1969 in Greenwich Village as they witnessed the aftermath of the raid on Stonewall and the clashes with patrons and police officers.  Stonewall is widely acknowledged as a defining event in the U.S. LGBTQ movement.

Pride Week included more than 50 events throughout the community, which started with the annual Rainbow Pride Flag Raising on City Hall Plaza, followed by Pride Day @ Faneuil Hall and the High Heel Dash for Charity, the Stonewall50 Community Forum where a panel discussed the significance of the Stonewall riots in 1969, Pride Lights honoring victims of HIV/AIDS, block parties in the Back Bay and Jamaica Plain and ended with Pride Night @ Fenway where the Red Sox donated 100 tickets to Pride youth groups. 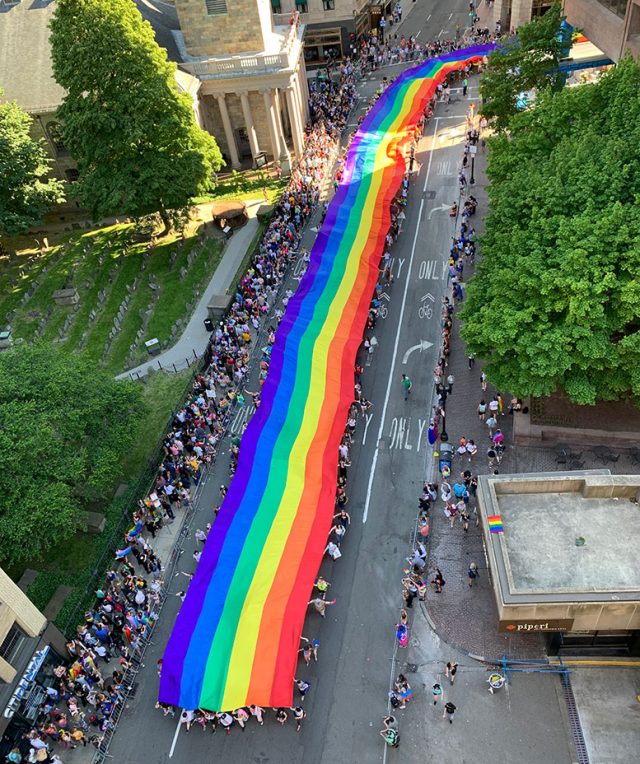 Boston Pride is sending a contingent of representatives to World Pride in New York City for the 50th Anniversary of the Stonewall Uprising on June 28 to 30. In addition to her duties as Boston Pride President, Linda DeMarco is co-president of InterPride, the organization responsible for licensing WorldPride.