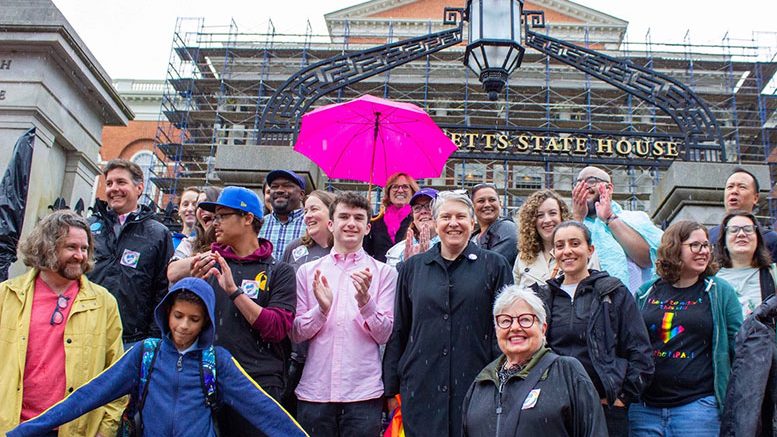 BOSTON–Despite the rain and chilly weather, LGBTQ families, advocates, and allies kicked off Pride Month (on June 1) with the Rally for Massachusetts Families outside the State House, calling on the legislature to promptly pass the Massachusetts Parentage Act (MPA) (S. 1133 / H. 1714), a bipartisan bill to ensure important legal protections for all children, including those with LGBTQ+ parents. After a hearing last November, the bill is awaiting further action in the Joint Committee on the Judiciary.

With the July 31 end of the current legislative session quickly approaching, speakers at the event, which was hosted by the Massachusetts Parentage Act Coalition, illuminated the issues confronting families in Massachusetts due to the Commonwealth’s outdated parentage laws and how the passage of the MPA would address such problems.

The speakers at the rally were:

Based on the Uniform Parentage Act (UPA) 2017, a best-practice framework for ensuring the protection of the legal relationship between parents and children, the MPA would update state law to clarify who can be a parent and how to establish parentage. The MPA would add important protections for children born through assisted reproduction and surrogacy. The bill would also enable LGBTQ+ parents to establish parentage the same way other families do, including through a voluntary acknowledgment of parentage, and provide a clear standard for courts to resolve competing claims of parentage.

“We are here to celebrate our families and also to celebrate the Mass. Parentage Act, which would update Massachusetts law that is definitely in need of updating. It has been over forty years since it’s been updated and so it excludes so many children and families including LGBTQ families. We want to make sure all children in Massachusetts, no matter the gender, the gender identity, the sexual orientation or marital status of their parents have equal access to all the paths to legal parentage,” said Leblanc.

“I really hope we can get this done this year. There’s not much time left so we have to work really hard,” said Rep. Khan. “This is very important because relationships between children and parents are the core of so many rights and responsibilities.”

“I want to talk today about the treasure of our Commonwealth and that’s our people. We are a diverse people and we are all different but we all have the same love and that love comes in many different forms that sow the seeds of love that lead to our families,” said Rep. Scanlon. “The laws regulating parentage do not reflect our diversity or the needs of our families. We have an opportunity right now to fix this through legislation…that gives all families legal protections that guarantee that children are not separated from their parents. We’re the only state in New England that needs to do this still.”

J. Shia, a de facto parent whose son Audai was placed in foster care because the state refused to recognize her parental status, talked about the constraints that current parentage laws place on her family. While obtaining legal guardianship enabled her son to return to her care, their family relationship is still questioned.

“Every day I carry a notarized copy of my son’s guardianship form in my wallet. I need to present this for schools, his doctors’ and dentist appointments,” said Shia. “I’m constantly being questioned, I even still need to notify the courts if I travel with him, out of the state or out of the country. For someone who’s been Audai’s primary parent since the day he was born, this situation is wildly degrading. I am his parent, not just his guardian.”

“I think that LGBTQ families are used to the fight, honestly,” said Crozier. “We’re used to doing whatever it takes to protect our children. When my first child was born, my partner and I were actually not allowed to sign her birth certificate in the hospital. We had to come back four days later, once the Commonwealth had verified with the Registry of Vital Records that we were married…because they didn’t trust that we were married, we didn’t get automatic entry into signing a birth certificate, we had to come back. …That’s what this bill is really about. From day one, in the hospital, our families are protected like everybody else.”

“My mom Caeli, who’s my de facto mother, has been in my life since birth. I’ll always think of her, no matter what Massachusetts state law says, as my mom.” said Jimenez. “She’s been there for me in my worst times and my best times. … Because she’s a de facto mother in Massachusetts, she only has limited rights. In all the other New England states, she would be recognized as a legal mother.”

“The national climate is scary for our families right now. In many places across the country, they don’t even want our families to be mentioned. They want everyone to pretend like we don’t exist. But we are here, and we deserve the same rights and protections as everyone else!” said Budd. “It’s well past time for Massachusetts to catch up to other states in New England and fully protect our LGBTQ families and all our families.”

“People with LGBTQ+ parents are still excluded from legal protections in many ways,” said McGranachan. This is a really big problem because sixty-three percent of LGBTQ+ millennials plan to grow their families in the coming years. That’s really actually pretty close to non-LGBTQ+ millennials. That’s a huge increase in the number of queer families that are existing now and will continue to grow in the coming years. So we need parentage protections now more than ever and the MPA means recognizing families from the start. There’s a new generation of people with LGBTQ+ parents who should not feel vulnerable and unprotected and unrecognized like I did.”

In 2004, before his two dads were able to legally marry, James Owen Nichols-Worley’s parents were the first to successfully petition the court to have both of their names listed on his birth certificate after James was born via assisted reproduction.

“Eighteen years later our statutes still have not been updated,” said Nichols-Worley. “Parents still have to wade through an unclear, inconsistent court system to protect their children born through surrogacy. There is nothing more important than protecting kids and their legal relationship to their parents. This legislation is critical because Massachusetts law does not reflect the diversity of families in our state.”

Be the first to comment on "LGBTQs To Legislature: Pass MA Parentage Act"