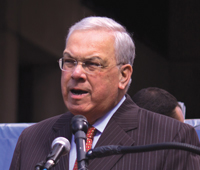 On Thursday, May 28th, Boston Mayor Thomas Menino announced that he will not run for reelection after holding the position for twenty years. During his time in office, Mayor Menino has been touted as the most pro-LGBTQ (lesbian, gay, bisexual, transgender and queer) mayor in U.S. history, most recently by MassEquality, who released a statement following the mayor’s announcement.

“He was an early supporter of marriage equality,” said MassEquality Executive Director Kara Suffredini. “He was an early supporter of transgender equality. He was an early supporter of programs addressing public health needs related to HIV/AIDS. And he has never been shy about using his office as a bully pulpit to encourage other political leaders to do the same.” [pullquote]“You called supporters of gay marriage ‘prideful.’ Here in Boston, to borrow your own words, we are ‘guilty as charged.’ We are indeed full of pride for our support of same-sex marriage and our work to expand freedom to all people,” Menino wrote in his letter. “There is no place for discrimination on Boston’s Freedom Trail and no place for your company alongside it.”[/pullquote]

When Boston citizens began applying for marriage licenses after same-sex marriage became legal in Massachusetts in 2004, Mayor Menino’s office ensured their safety as they filed with the City Clerk. Most recently, Menino participated in the DOMA (Defense of Marriage Act) justice rally at City Hall Plaza on March 28th, where he instructed that the rainbow flag be flown in honor of the historic Supreme Court hearings being held on Proposition 8 and DOMA.

“His leadership in articulating that all people deserve to be treated equally regardless of who they love helped establish Boston as one of the most LGBTQ-friendly cities in the nation to live,” said Yarbrough and Marshall. “As our vision states, ‘We envision a world where Latino/a and Black LGBTQ individuals can comfortably and unapologetically incorporate themselves in their racial/ethnic community and mainstream LGBTQ community simultaneously.’  We feel that Mayor Menino also believes in this vision as his office has met with us multiple times over the years to discuss making our vision a reality.”

Stephen L. Boswell, MD, President and CEO of Fenway Health, also commented on the Mayor’s vital role as an ally for the LGBTQ community.

“Mayor Menino has been an incredible ally to Boston’s LGBT community from his first term as Mayor until today,” Boswell said. “His visible and vocal support of civil rights and equality for all Boston residents has helped to make this city one of the most welcoming places for LGBT people in the world.  We’ll be losing a valuable ally when Mayor Menino leaves office, but hopefully our next Mayor will be equally supportive of our community.”

According to Boswell, the mayor has attended almost every major fundraiser for Fenway Health during his time in office and played a vital role in the capital campaign to build their Ansin Building at 1340 Boylston Street.

“It’s hard to overestimate just how much of a positive impact his leadership has had on the overall health and well-being of Boston residents and the LGBT community in this city.”

Perhaps his most publicized act of support for the LGBTQ community was Mayor Menino’s letter to Chick-fil-A president Dan Cathy last year after the restaurant chain announced plans to open locations near the Freedom Trail in Boston.  Because of Chick-fil-A’s open proclamations against same-sex marriage, Menino told Cathy the company would not be welcome in Boston.

“You called supporters of gay marriage ‘prideful.’ Here in Boston, to borrow your own words, we are ‘guilty as charged.’ We are indeed full of pride for our support of same-sex marriage and our work to expand freedom to all people,” Menino wrote in his letter. “There is no place for discrimination on Boston’s Freedom Trail and no place for your company alongside it.”

Rebecca Haag, President and CEO of AIDS Action, shared in a press release how Mayor Menino has been an advocate for people living with HIV and AIDS throughout his tenure, championing the cause even when other politicians during the time were afraid to come forward with their support.

“In the mid-1980s, during the darkest days of the AIDS epidemic, City Councilor Menino advocated employing 24 full-time outreach workers in the city of Boston to educate intravenous drug users about the risk of AIDS,” Haag said.  “This was cutting edge public policy at the time.  He also insisted on two community health vans to be deployed to at-risk neighborhoods to provide general health education as well as AIDS prevention information and on increasing the availability of drug treatment programs.  He also pushed to implement a needle exchange program in the city.”

According to Haag, the Mayor event helped raise money for a liver transplant for one of AIDS Action Committee’s employees, Belynda Dunn, when her health insurer denied payment for the transplant due to her HIV positive status.

In a recent interview with WBUR Boston’s NPR, the mayor said he would “stay very engaged in Boston’s future,” after leaving office, but did not give specific details.