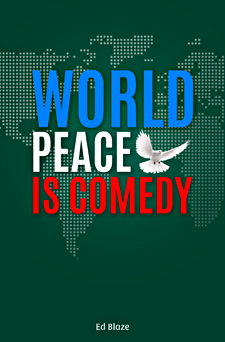 Shares Lessons of Life and Friendship

In a witty but formal style, Blaze explains that humor is his way of communicating and creating bonds with people from different cultures—a medium through which people can understand each other, cultivate friendships and share unique experiences.

“Hilarity allowed me to settle quickly in America,” says Blaze, describing life choices he had to make after leaving his native Tanzania, in East Africa.

“World Peace Is Comedy”—which is available for purchase on Amazon and other digital bookstores—chronicles pain, joy, friendship, solitude and togetherness. It depicts how Blaze made his classmates laugh, easing the existence of children on an African continent where opportunities were limited. He never thought comedy would be his calling. [pullquote]“The book talks about my childhood in Africa, my life as a stand-up comedian, my drive to reach out and help aspiring comics through my start-up company Metro Comedy Entertainment, and my passion for helping charities.”—said Blaze[/pullquote]

“I used to have an African name, and I thought it was great until I came to America and found out it was just a bunch of random letters strung together,” said Blaze. “The book talks about my childhood in Africa, my life as a stand-up comedian, my drive to reach out and help aspiring comics through my start-up company Metro Comedy Entertainment, and my passion for helping charities.”

Choriny Bernadi Mbeche (born June 24, 1975), known by his stage name Ed Blaze, is a Tanzanian-born comedian, author and promoter. After landing small stand-up comedy jobs in the 2000s, he decided to pursue his entertainment dreams and to walk in the footsteps of his role models, including Chris Rock, Dave Chappelle, Bill Cosby, Eddie Murphy, Louis C.K. and Dave Allen. He has a passion for helping charity, and believes that comedy is a healing force for people all over the world, regardless of background.

The Boston Gay Men’s Chorus puts the ‘Merry’ into Christmas!

Scare Tactics: 10 Halloween Marathons For You and Your Boo