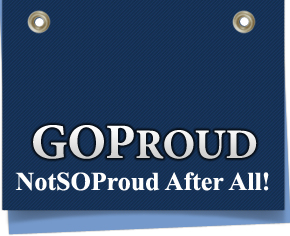 There are some folks in this world who just don’t understand gay Republicans. I am not one of them. Though I should make clear that by “understand” I mean “acknowledge the rightful existence of” and not that I can make sense of the whole thing.

But hey, to each his own – or her (Hi Mary, hi Heather. Congratulations and all that). Gays are a diverse lot and certainly that is true when it comes to politics. Yes, the Democrats are “better” on LGBT issues. Way, way better, actually, though not as great as they could, and should, be. And compared to Republicans, the Democrats are a non-stop Pride parade.

Still, it is not a surprise that groups like GOProud, a conservative gay Republican group, exist. But it is kind of surprising that a group formed explicitly by a bunch of gays would “enthusiastically” endorse Mitt Romney for president. To say that Romney is anti-gay is an understatement, no matter what happened in Massachusetts on his watch. He’s renounced all of that and the folks he has aligned himself with will make damn sure he stays that way.

So what gives? Well, apparently if you’re a member of GOProud, gay rights issues are irrelevant.

According to GOProud’s executive director Jimmy LaSalvia, “We think that jobs, the economy, healthcare, retirement security and taxes are all ‘gay issues,’ and on every single one of those issues, Mitt Romney is light years better than President Obama.”

Aww, isn’t that cute? Basically any issue is a “gay issue” so long as someone gay takes issue with it. Got that? Never mind that Romney’s policies would no doubt further hurt LGBT families. Take jobs, for instance. Romney won’t even take a stance on equal pay for women; you think he gives a shit about employment protection for homos? As for healthcare, there are countless same-sex couples who cannot be on each other’s health care because they’re strangers in the eyes of the law. Retirement security for gays? Ha! They’ll spend it all on lawyer fees. And don’t get me started on taxes. Just ask a same-sex couple committed to each other for years, even decades, what it feels like to have to mark “single” on their tax return form.

So yeah, these issues are gay issues, but saying that Romney is better than Obama here pretty much erases the whole gay part. GOProud doesn’t really give a shit about gay issues, unless we’re talking about gays with a lot of money.

Don’t get me wrong. Money isn’t all bad and having lots of it must be nice. But it certainly does take the sting out of the every day discrimination that the LGBT 99 percent face.

So why be a gay group at all if you don’t think civil rights are important? Granted, LaSalvia acknowledges that the election is “bigger than just one issue.” No shit. I don’t have a problem with that. What I do have a problem with is an enthusiastic endorsement of an anti-gay president from a gay group. It is indicative of some serious self-hatred and/or smug disdain for the issues that the every-day gay faces.

I can’t help but picture GOProud members emailing each other steamy Ayn Rand fan fiction featuring John Galt and Howard Roark. Gay Rights Shrugged, perhaps. And just imagine what fun they could have with a title like The Fountainhead. Who knows? Maybe it’ll become a national phenomenon: Fifty Shades of the Self-Loathing Gay.