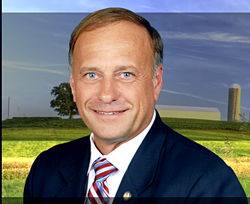 Oh, Steve King. You are a royal creep, indeed.

A longstanding foe of LGBT people and anyone who sees LGBT people as, oh I don’t know, human, King has once again opened his joker of a mouth to say something incredibly dumb.

Readers of this column are certainly aware that anti-LGBT discrimination exists in the workplace. Making this issue even more exciting, in many states, and Michigan is one of them, firing someone or refusing to hire them based solely on sexual orientation is totally legal. There is no state law against it; therefore if you are a victim of such discrimination, you have no legal standing. You cannot sue. Bummer for you.

Some people have suggested that a sensible way to approach this issue is to include sexual orientation and gender identity in state anti-discrimination laws. Oh, those crazy dreamers.

King has a better idea: stay in the closet homos.

On April 4, he told Think Progress, that you can’t tell private business who they can’t discriminate against. “You have private sector businesses here and they need to have freedom to operate,” he said. In other words, firing someone because they’re gay would strictly be a business decision. Stop being so sensitive, gays.

“In the first place, I would think that unless someone makes their sexuality public, it’s not anybody’s business, so neither is it our business to tell an employer who to hire,” King continued. “He won’t know who to discriminate against in the first place.”

See, if people don’t know you’re gay, they won’t discriminate against you. Duh. So for all of those homos out and proud, if you face discrimination, it’s all your fault. Quit yer cryin’.

This is hardly a new position for King. In 2010 he said about gays in the workplace, “If people wear their sexuality on their sleeve and then they want to bring litigation against someone that they would point their finger at and say, ‘You discriminate.’” Because protecting companies from being accused of discrimination is far more important than protecting gays from being discriminated against.

A good question, just how does one discriminate against someone based on their sexual orientation? Why, it’s a complete and total mystery! Let’s see if I can come up with some off the top of my brain. You could refuse to grant them promotions. You could fire them. You could kick them out of your rental property.  You could bully them until they drop out of school and/or kill themselves. You could rape them. You could kill them. The list goes on and on, with plenty of documented evidence should you want to get totally depressed. But as King pointed out, they all brought it upon their gay selves.

Things were better before all this “out and proud” crap. All you have to do is look at history. Travel back to the time before Stonewall when gays were largely living in the shadows and nobody ever bothered them and life was great. And it could have been happily ever after forever if it hadn’t been for those meddling kids.

Wait, did I say meddling kids? My apologies, I was thinking of Scooby Doo. I meant meddling cops. The cops, who routinely harassed, beat, jailed and otherwise took advantage of so many sad, closeted queers.

Or, as King would call it, the good old days.