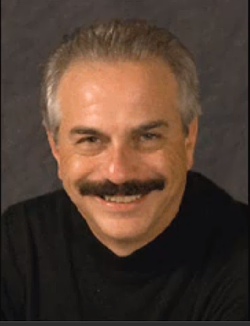 Joseph Farah from World Net Daily, but most importantly an anti-gay right “writer” who compares gays with Nazis, with his “mighty cowardly” anti-LGBT bloody pen.
Photo: From YouTube

A couple of weeks ago I was sitting around trying to think of something cool and hilarious to do and I came up with the idea to write “You are a faggot” in grammatically incorrect Spanish on my face. Totally original, right? I mean, who else would think of such a thing?

As it turns out, Yunel Escobar, a shortstop for the Toronto Blue Jays, beat me to the punch. In that he really did write “You are a faggot” in grammatically incorrect Spanish on his face and then trotted out onto the baseball field, in real life.

Unsurprisingly, people noticed and it caused quite a stir, leaving Escobar suspended for three games with his salary for those games reportedly being donated to the You Can Play campaign and to GLAAD.

This turn of events has folks on the anti-gay right flamin’ mad. Joseph Farah, the man behind World Net Daily, was inspired to write in his Oct. 2 Between The Lines column (seriously. His WND column handle is Between The Lines) titled “Homosexual Fascists Target Baseball.”

“Are Mom and apple pie next?” Farah’s column begins. “Those may be the next targets of the homosexual fascists – who are like the anti-American poofy sect of the Taliban.”

That’s right, folks. A grown a$$ man writes “You are a faggot” in grammatically incorrect Spanish on his face and yet gays are the bad guys here. Personally, I have nothing against moms – heck, I am one myself – and my wife makes a pretty amazing apple pie. Oh, wait.  That probably falls under Farah’s definition of homosexual fascist activity.

Comparing gays to the Taliban is a nice touch. Getting offended because a baseball player writes “You are a faggot” in grammatically incorrect Spanish on his face (I cannot emphasize that enough) is totally comparable to, say, the destruction of the World Trade Center and the murder of thousands of Americans.

Farah also throws in a Nazi comparison just for good measure when he refers to gays as the “crude, vulgar, name-calling, arrogant pink-shirt gestapo.” My guess is that Farah is not trying to be ironic when he accuses gays of “name-calling.”

Oh, and gays are also worse and more oppressive than Castro.

“[Escobar] probably thought once he left Fidel Castro’s island paradise that he would be able to speak his mind, joke around and not fear the thought police,” Farah writes. “Was he ever wrong.”

Yes, poor little Escobar, coming to America only to get called out for writing f$#@&d up things on his face.

Farah honestly doesn’t see what the big deal is since “faggot” is “used far more often by homosexuals than by heterosexuals.”

“Should non-homosexual Americans be fined, suspended and humiliated for a remark that wouldn’t draw a second glance in most homosexual bathhouses?” Farah writes.

Granted, I haven’t spent much time (any, actually) in gay bathhouses (then again, Farah is the one positioning himself as the expert here, not me). But I suspect that if you walked around with “You are a faggot” written in grammatically incorrect Spanish on your face you would most certainly “draw a second glance.” Probably even more so if you wrote it on your penis.

“Has anyone … picked up a “gay” newspaper lately and seen the kind of obscenity they portray and the filthy language they use?” Farah writes.