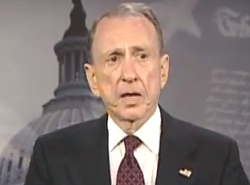 “On behalf of the Human Rights Campaign, I extend our condolences to the family of Arlen Specter.  His support for repeal of ‘Don’t Ask, Don’t Tell’ and passage of the Matthew Shepard hate crimes law was critical. As was his willingness to change his mind and oppose the Federal Marriage Amendment in 2006 after voting for it in 2004.

“While we disagreed with his support for some conservative judicial nominees which will leave a lasting negative impact on our community, he was willing to work across party lines to get things done.

“I had the opportunity to host him in Los Angeles while working with him on funding for stem cell research at a time when it was difficult for a Republican Senator to speak out.”

Via Twitter, politicians and others expressed their condolences for the loss of the for Senator and his work. To view the comments from the President, Ambassadors, etc., check on Twitter: #ArlenSpecter

Former Senator Specter was instrumental in voting for LGBT issues that created legislation to move this community’s rights forward. Specter died from complications of non-Hodgkins Lymphoma, according to a press release from his family. The Funeral will be held on Tuesday, October 16th at Har Zion Temple.