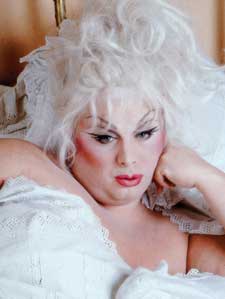 By: Brook Rosini/Special to The Rainbow Times–

The 26th Annual Connecticut Gay & Lesbian Film Festival (CTGLFF) is set to light up the silver screen at Cinestudio with films of interest to LGBT audiences from May 31 – June 8, 2013. The Rainbow Times got in touch with Shane Engstrom, Director of Out Film CT, and Jen Kaplan, Director of Marketing for CTGLFF, to find out more about the festival, its mission, and this year’s must-see films.

Brook Rosini: What made you decide to put together this festival?

Engstrom: AlteRnaTiveS, the original name of the organization that created the film festival, was founded in 1987 as a gay and lesbian cultural organization in Hartford. The organization explored a variety of different activities including theater, film, a gay history project, and a literary journal, Invert, which produced four issues. The Connecticut Gay & Lesbian Film Festival is the one project that survived and flourished over the years, becoming the wonderful community event it is today.

Q. How long have you been doing it?

Q. What is the process for submitting a film, and what are the criteria for acceptance in the festival?

Engstrom: Filmmakers and distributors send screener DVDs to us for consideration. The films must contain content of interest to the gay, lesbian, bisexual, and transgender community. They can be feature films, documentaries or short films. Then the fun begins, and the screening committee watches the films — usually as a group — and evaluates and discusses them. Then in early April, we have one final meeting where we consider all the films we watched over the course of the year to come up with a final lineup for the festival.

Q. What are the goals of the festival?

Engstrom: The primary objective of this nonprofit cultural organization is to plan, organize, and sponsor the annual Connecticut Gay and Lesbian Film Festival, providing an essential forum for original, creative voices, opinions, and viewpoints, which are often overlooked and ignored in the mainstream media. The film festival presents U.S. and international films by gay, lesbian, bisexual, and transgender (GLBT) filmmakers, about the GLBT community, or of interest to the GLBT community, especially those that might not otherwise be available for viewing in this region.

Q. What kind of audience does the festival serve?

Kaplan: The audience is comprised of all types of members of the GLBT community and its allies. The ages range broadly from people in their 20s to their 70s. We have a very loyal following and attendees who have been coming for upwards of 10 years. However, we also get folks who are new to the area or just heard about the festival who are attending for the first time.

Q. What are some highlights of this year’s festival?

Kaplan: One of the highlights for me is the screening of two films with religious themes on Saturday, June 1 at 3 p.m. at Cinestudio on the campus of Trinity College in Hartford. The first film being shown, Taking a Chance on God, is based on the life of 86-year-old Catholic priest John McNeill and his experience as an activist and founder of LGBT Catholic group Dignity/New York.  McNeill refused to be silenced by the Vatican on LGBT issues, which resulted in his expulsion from the priesthood. The film also shows his relationship with his partner of 46 years. Director Brendan Fay will be joining us to facilitate discussion following the screening. The other film, I Am Gay & Muslim, by director Chris Belloni, focuses on the challenges facing gay rights in the Islamic world. The men portrayed in the film openly share their personal experiences and talk about the ambiguity and secretiveness of the life they feel condemned to live, although some have openly acknowledged their sexual orientation.

The Connecticut Gay & Lesbian Film Festival is organized by Out Film CT, a nonprofit organization. All screenings take place at Cinestudio, 300 Summit Street, at Trinity College in Hartford, CT. Lead sponsors for the 2013 festival include Cigna, Pratt & Whitney, Mini New Country, Citizens Bank, and The Rainbow Times. For more information, to view descriptions of films being screened, or to donate, visit www.outfilmct.org.